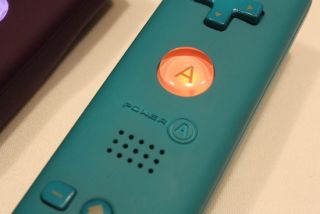 While we're all normally sitting down on the couch when we're playing a video game, we can still work up quite a sweat from all the intense action. Couple that with holding into a controller tightly and you're going to get some moisture going on in your palms.

Controllers with built-in fans aren't a new thing, but the owner of the concept hasn't been happy with the implementation of "air flow" controllers thus far. He's working for Power A now, and with his internal influence, you may never have to deal with sweaty palm syndrome again.

The Power A Air Flo controller will be available for both Xbox 360 and PlayStation 3. The latest design features a two-speed fan, so you can adjust the level of cooling depending on your… situation.

Both models rely on a 10-foot/3-meter cord due to the power requirement for the fans. They also have the same layout too, which means that PS3 gamers may appreciate the swap of the d-pad and left analog stick positions.

While visiting with Power A, we also got to catch a glimpse at new variations of the Lego Wii Remote that we've come to love from last year. Originally, the Lego Wii Remote was a Toys R Us-only product, but for 2011 you'll be able to find them in other retailers and in more colors.

For those who find the regular Wii Remote size a bit too chunky, Power A has also made a smaller version of the Wiimote and Nunchuk called the Pro Pack Mini. That's an already existing product, but the company will release an updated version later this year with Wii Motion Plus integrated, as well as upgrade the packaging to support the more capacious AA batteries for longer life.