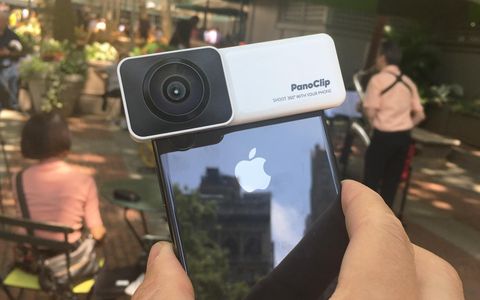 The PanoClip is the least-expensive smartphone accessory for taking 360-degree photos, but be prepared to make some compromises.

PanoClip takes a novel approach to 360-degree smartphone photography. Instead of selling you a device with two cameras built in, its accessory simply uses the cameras already on your phone. This strategy has a few advantages — for example, the PanoClip costs $49, which is much less than other 360-degree cameras — but it has a few drawbacks too, which I discovered during my testing.

The PanoClip itself is a white, rectangular box that's slightly wider than the iPhone X and about an inch and a half thick. On each of the long sides is a lens, and in the bottom is a slot into which you insert the iPhone. Once the phone is fully inserted, the PanoClip's two lenses correspond to the front and rear cameras on the iPhone. It's a clever idea.

PanoClip's free app (which you need in order to use this accessory) takes a photo from both of the iPhone's cameras in quick succession and then stitches them together.

From there, you can add stickers and filters, and then share the photo in a variety of formats, such as a standard 360-degree photo or an animation that slowly pans the camera. PanoClip's app also lets you view 360-degree photos and videos taken by those who own the PanoClip as well as Insta360 cameras.

The PanoClip is available for the iPhone X, iPhone 6/7/8 and iPhone Plus models. An Android version is on the way, but timing for that has not been announced.

Photos I took with the PanoClip were generally pretty good; the app adequately adjusted for different lighting conditions and did a good job of stitching the two images together. However, there's one thing the PanoClip couldn't account for: the superiority of the iPhone X's rear 12-megapixel camera over that of its front 7-MP TrueDepth camera.

Just to make sure, I took one photo and then spun 180 degrees and took a second photo. The half that was sharper on the first photo was much less so on the second picture.

The lesser of the two halves wasn't horrible — I could still make out my face clearly, and skin tones were accurate — but the difference was very noticeable.

At $49, the PanoClip is the least-expensive 360-degree camera accessory out there. It's half the price of devices like the Samsung Gear 360 and the Insta360 Nano, making this type of photography even more affordable for the masses.

However, there are some limitations to PanoClip's approach. Because the cameras it relies on aren't the same, you end up with a picture where one half is clearly better than the other half. If you can live with that, then you'll find plenty to like about this affordable 360-degree camera accessory.