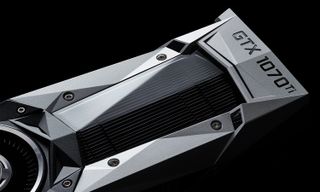 Nvidia's at it again. Just when I thought the chip maker had released every possible GPU for the Pascal generation, it's proven me so very wrong. The company has just announced its new GeForce GTX 1070Ti GPU which is available now for $449.99 for Nvidia's Founder Edition model.

A half-step between the GTX 1070 and GTX 1080 GPU, the 1070Ti takes a lot of cues from the latter in an effort to stave off AMD's growing stable of cards — particularly the Radeon RX Vega 56.

The 1070Ti has the same base clock speed as the 1080 (1,607MHz). The Founder's Edition of the 1070Ti is also architecturally similar to the 1080 as it's been equipped with the same power supply and has the same copper vapor cooling chamber.

As far as use cases go, Nvidia posits that the new GPU is tailor-made for gaming on ultrawide monitors and panels with a 2560 x 1440 resolution. Like most of the other Pascal GPUs, the 1070Ti is also VR-ready with a promise of delivering high frame rates whether you're checking out a virtual landscape or traditional gaming.

Our sister sites Tom's Hardware and AnandTech got their respective hands on the MSI-branded 1070Ti and the Founder's Edition. The MSI 1070Ti is exactly like the Founder Edition, except MSI used its own cooler, which does a better job at keeping the GPU at an optimal temperature, so it delivers somewhat better performance.

Both sites ran a battery of tests on their respective cards, including running benchmarks from a number of popular games at QHD (2560 x 1440) and 4K (3840 x 2560) including Destiny 2, Doom, Rise of the Tomb Raider and Middle-Earth: Shadow of War to name a few.

Pretty darn good. The card performed as expected, keeping a close pace most of the time with the 1080 while consistently doing better than the 1070. The 1070Ti also outperformed its direct rival, the AMD Radeon RX Vega 56 more often than not.

The Nvidia GeForce 1070Ti GPU gives you performance that's comparable to a 1080 at a less expensive price. Although it's designed to work best with ultrawide monitors and QHD panels, the 1070Ti's main task is to take out the competition — the AMD Radeon Vega 56 GPU and for many of our tests it rises to the occasion. But there are a few instances where the scores are closer than Nvidia would care for.

However, in order for Nvidia to deliver that true knockout punch, it would have to drop the price between $50 and $100. Still, the GTX 1070Ti is a great choice for gamers that don't want to fork out upwards of $550 for a GTX 1080 and aren't too keen on AMD products.