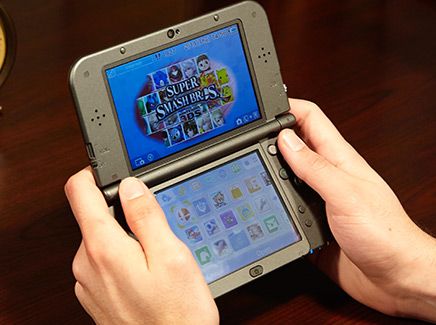 The New Nintendo 3DS XL is the best version of Nintendo's handheld yet, but not everyone will want to upgrade.

Ever since the Game Boy became the Game Boy Pocket, Nintendo has made a habit of refining its portable consoles repeatedly, until they're just right. The New Nintendo 3DS XL — “New” is officially part of the name — is the latest product of that philosophy, taking the dual-screen design of 2012's 3DS XL and adding extra controls, a speedier processor and an improved 3D effect. The result is the best version of Nintendo's excellent handheld yet, though it's one that not every 3DS owner will need to upgrade to right away.

The New Nintendo 3DS XL retains the curved, dual-display clamshell design of the original 3DS XL, while adding some significant functionality improvements. The first thing I noticed was the system's new controls, which include extra ZL and ZR shoulder buttons, as well as an eraserlike C-Stick nub for controlling the camera and performing special actions in select games.

The handheld's core button layout — a control stick and d-pad on the left, with four face buttons on the right — remains the same, but there are some nice added touches throughout. The start and select buttons have moved from below the touch screen to the right of the device, placing them conveniently under the spot where my right thumb usually rests.

The system's A, B, X and Y face buttons are now color-coded with red, yellow, blue and green lettering, respectively, which is a subtle homage to Nintendo's old-school Super Famicom controller. The 3DS' game card slot is now at the bottom instead of the top of the device, which was helpful in preventing accidental game ejections by my pointer fingers.

While the New 3DS' button layout makes it a joy to use, there are some things about the hardware I don't love. The system's glossy outer shell (available in charcoal and red, alongside some shiny special editions) looks nice, but it's far more susceptible to fingerprints than the matte paint job on the original XL.

I can deal with a few fingerprints, but I can't get over how Nintendo has made accessing the system's memory-card slot a herculean task. While older 3DS units utilized SD cards that could be accessed via a simple snap-open port, the New 3DS card uses microSD Cards and requires you to screw open the system with a tiny Philips #0 screwdriver in order to swap them out.

In no scenario should I ever be running to a hardware store just to be able to switch memory cards on a game system, but that's exactly what I had to do. This would be somewhat forgivable if Nintendo included a respectable amount of memory with the device, but you only get a removable 4GB card to start out with.

The New Nintendo 3DS XL's glasses-free 3D display is bolstered by new face-tracking technology, which is built into the front camera and is designed to make the 3D effect more stable at multiple viewing angles.

The improved stability over older models is quite dramatic: When playing Super Smash Bros. with the 3D slider all the way up, I was able to move the system roughly 20 to 30 degrees on each side without losing the 3D effect. On a standard 3DS XL, the 3D became distorted after I gave the handheld even the slightest nudge.

I typically prefer to play my 3DS games in 2D, but the new system's 3D effect is such a drastic improvement that I find myself keeping the slider up from time to time. While the New 3DS' face-tracking capabilities are currently limited to providing extra-stable 3D, the accuracy of the technology has me excited for what Nintendo could do with it in the future.

Aside from the improved 3D, you're getting the same 4.88-inch 3D display on the top half of the system and 4.18-inch touch display on the bottom. While bright and colorful enough for Nintendo's vibrant games, the main display's 800 x 240 resolution is starting to show its age. Games like Fire Emblem: Awakening and Monster Hunter 4 Ultimate look gorgeous at a glance, but you'll notice plenty of jagged edges when you look closely — especially with 3D on.

The New 3DS XL is powered by a quad-core ARM11 processor instead of the dual-core ARM11 and single-core ARM9 found in older models. While the added processing power has little effect on gameplay (for now), its benefits quickly become apparent when you're loading and downloading games.

When booting up Super Smash Bros., a roughly 2GB game, the New 3DS XL took me to the title screen in 15 seconds. The standard XL took double that time. The older hardware took a sluggish 4.33 seconds to exit to the home screen from the game, but the new model got me there in 1.76 seconds.

The New 3DS XL also smokes its predecessor when it comes to download speeds. The system took 1 minute and 47 seconds to download the 117MB demo for Sonic Boom: Shattered Crystal, while the older unit took more than double that time, at 4:09.

Nintendo will soon tap the New 3DS' extra power for beefed-up games that are exclusive to the newer hardware. April's Xenoblade Chronicles 3D, a port of a Wii game, will be the first title to require a New 3DS.

Depending on which titles you play, the New 3DS' new C-Stick can be a game-changer. The tiny rubber nub looks and feels like the pointing stick you'll find in many business laptops, but it's surprisingly responsive and does an admirable job handling functions that are typically performed with a right analog stick on console controllers.

The C-Stick gave me an easy way to perform powerful Smash attacks in Super Smash Bros., and controlling the camera in Monster Hunter 4 Ultimate and Resident Evil: Revelations felt almost as natural as having a standard controller. Taking advantage of these right-analog-stick functions on older 3DS models requires a bulky and hard-to-find Circle Pad Pro attachment; the New 3DS offers dual-stick capabilities out of the box.

When you factor in the new C-Stick and the added ZL and ZR shoulder buttons at the top, the New 3DS XL has just as many inputs as most console controllers. This meant that I could finally use the same finger to block and grab in Super Smash Bros. on the 3DS as I did in the Wii U version of the game.

Even the returning 3DS inputs get plenty of love, with buttons that provide a more satisfying click than those of the standard XL, and a Circle Pad that feels smoother and less resistant.

The New 3DS XL has built-in near-field-communication support (NFC) for amiibo toys, which are plastic versions of characters such as Mario, Pikachu and Donkey Kong that activate special content in select games for $12.99 apiece.

Fortunately for toy collectors, the New 3DS detects amiibo just as quickly as the Wii U GamePad does. After plopping my Link and Luigi amiibo on the New 3DS' touch screen while playing Super Smash Bros., the characters instantly appeared on my selection screen, complete with the same stats and abilities I had unlocked for them in the Wii U game.

Smash is the only current 3DS game to utilize amiibo, but the upcoming titles Code Name: S.T.E.A.M. and Xenoblade Chronicles 3D will also support the interactive toys.

Aside from amiibo support, the New 3DS XL comes with the same extras found on every version of the system. The console's rear VGA camera has been better-optimized for low light, but the quality is still far too blurry to rival your smartphone. The same goes for streaming apps such as YouTube and Netflix, which look unpleasantly pixelated on the machine's 800 x 240 display.

Value: Should You Upgrade?

The New Nintendo 3DS is an easy sell for anyone looking to pick up a 3DS for the first time, but there's one major caveat: The system doesn't come with a charger. That's right — Nintendo is so confident that you're upgrading from an older model that the company has eschewed the very accessory that keeps it powered.

You'll be set if you have a Nintendo DSi charger or newer, but anyone else will need to either shell out $10 for Nintendo's official AC adapter or look for a third-party alternative.

If you are thinking of upgrading, the New 3DS' value depends on which model you currently own, as well as how much you covet its new features. The new model has the same screen size and resolution as the standard 3DS XL, so your $200 mainly goes toward new controls, a faster processor and better 3D.

Coming from the original, tiny Nintendo 3DS, I personally found the New 3DS to be much more of a no-brainer upgrade. I've been yearning for the XL's bigger display for a while, and the new features sweetened the deal tremendously.

If you're on a budget (or are shopping for a youngster), you can always opt for the $130 Nintendo 2DS, which eschews the XL's 3D effect, clamshell design and big display.

All systems in the 3DS family have access to the same excellent game library, which includes hits like The Legend of Zelda: A Link Between Worlds and Fire Emblem: Awakening, plenty of digital indies and just about any game released for the original Nintendo DS. Upcoming Wii port Xenoblade Chronicles 3D will be the first game that works only with the New 3DS, but it's hard to imagine Nintendo confining many of its major franchises to the newest hardware.

Unless Nintendo has another revision up its sleeve, the New Nintendo 3DS XL is the definitive version of the company's long-running handheld console. The system's improved controls and extra-stable 3D display make playing 3DS games more enjoyable than ever, and its beefed-up processor makes it behave more like a piece of grown-up technology and less like a toy.

The New 3DS XL is definitely not flawless — its screwed-in microSD Card slot makes transferring games from old models a pain, and its lack of an included charger is a disservice to first-time 3DS owners. You can still enjoy almost every big 3DS title coming this year if you hold on to your existing 3DS XL, 3DS or 2DS, but the benefits of owning a New 3DS XL become apparent after you spend just a few hours with the system.