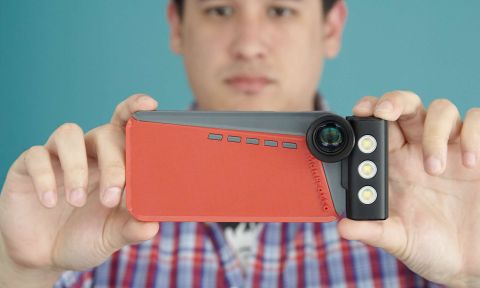 Manfrotto's updated case for the iPhone 6 lets you use your old lenses on a new phone, but its 3x telephoto lens produces too much distortion.

Adding to its arsenal of five iPhone lenses, Manfrotto's 3x telephoto lens ($30) promises to bring you closer to the action. Featuring a screw mount that works with its existing iPhone 5 and iPhone 6 cases, is Manfrotto's zoom lens a worthy addition to your quiver?

Instead of making a whole new system for its lenses for the iPhone 6, Manfrotto created a $25 case with the same threaded mount used on its iPhone 5 model. The new case is a two-toned, two-piece plastic affair with a jointed back that makes inserting your phone a breeze. Unfortunately, its construction feels cheap and fragile, like a handout you might get at a convention.

However, I like its rail system, which allows you to slide the included kickstand onto any of its edges, and also features a standard tripod thread mount.

As with previous products, Manfrotto's 3x telephoto lens is made out of aluminum, and screws easily into the case's threaded mount.

Manfrotto's current lineup of lenses includes a polarizer, wide angle, fisheye, 1.5x telephoto, super-wide angle and macro lenses, which are available individually depending on the lens, or as part of a two- or three-lens kit. They all feature the same threading, so they can be used interchangeably with all of Manfrotto's iPhone 5/5s and iPhone 6/6 Plus cases.

This makes any scene with straight lines look like it was shot inside a hall of mirrors.

A shot from Exolens' telephoto lens, which has the same 3x zoom, features much less distortion, not to mention better -- but not great -- overall sharpness.

In a scene at Madison Square Park, where the pinched distortion is less noticeable, everything not in the center looked exceedingly soft and blurry.

There's also heavy chromatic aberration (rainbow banding) around the edges of the photo (most notably on the right).

Although Manfrotto's 3x telephoto lens gives you more reach than other iPhone lenses, it comes with so much pincushion distortion and lack of focus, I'd rather discard the photos it produces than share them with others. Even in scenes where the pinched look is less noticeable, the blurry soft edges and heavy chromatic aberration make pictures it captures hard to like.

I like the case's simple design and easy-to-use threaded mount, but the cheap plastic used in its construction makes it feel like it costs even less than its $25 price tag. The only savior here is that Manfrotto's older lens work on the new iPhone 6 case. This means you can use the lovely portrait lens I reviewed last year for the iPhone 5 on your phone today, but this 3x telephoto lens is a pass.