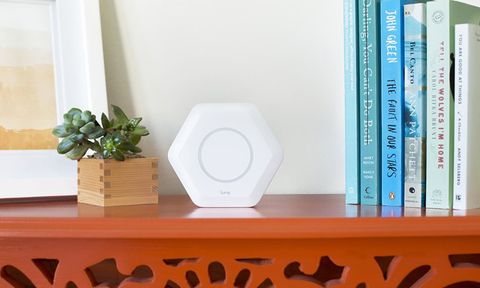 Expensive and with midrange performance, the Luma routers are small, easy to use and let you set up a mesh network in your home for greater coverage, but the devices don't let you customize much of anything.

Instead of relying on a single router to fill your home with wireless connectivity, Luma Surround WiFi uses multiple devices to create a mesh network that pushes Wi-Fi to every corner of your home. Ultimately, the tiny hexagonal devices don't provide a lot of range, but they can move data with the best of them. At $399 for three, there are better ways to fill a house with Wi-Fi, but none easier.

If all you care about in a router is that it's easy to set up, run out and get the Luma Surround WiFi router. Also available as a single unit for $149, the Luma is for those who don't know about the details of networking and don't care.

At 4.6 x 4.6 x 1.2 inches, the small white hexagonally shaped Luma devices look like no other networking device around and are easy to hide on a bookcase or show off on a coffee table in the middle of the room. A power cord keeps Luma from lying flat. Rather than multicolored blinking LEDs like most routers or a touch screen like the Starry Station router, Luma features a single large circular light around its center.

While you can use a single Luma on its own as a stand-alone router in a small home, like similar mesh-networking products such as the Eero and Netgear's Orbi, the real value comes when you add multiple devices to create a mesh network. Here, one device acts as a router and the others as wirelessly connected extenders to push Wi-Fi throughout the home.

You can use up to 10 Luma devices at a time, but one or two Lumas should cover the average apartment size of 998 square feet, based on the Census Bureau's 2013 estimate. You'll need at least two Lumas to fill 2,598 square feet — the size of the average home — and my 3,500-square foot house took three.

Luma's back has a pair of RJ-45 1-Gbps Ethernet jacks, a USB 2.0 port and a recessed reset button for wiping the device of its current settings. The Luma you use as a router has a LAN port for your broadband modem and a second one for a wired networked device like a storage system or printer. Your other Lumas can use their two LAN ports for connecting other devices.

MORE: Best Router - Get a Better Wi-Fi Signal at Home

Under its smooth skin, Luma is a 2x2 router that delivers two independent lanes of data traffic, while using a pair of leading technologies — MU-MIMO, for efficient traffic management, and beamforming, to better direct the signal to the receiving antenna on a connected device. The Luma tops out at a maximum throughput of 1.3 Gbps.

Based on our real-world testing using Ixia's IxChariot software in a crowded Wi-Fi environment, Luma was disappointing. The user can't separate its 2.4- and 5-GHz transmissions, and a single Luma managed a combined throughput of 291.5 Mbps at 5 feet. This drops off to 110.7 Mbps at 140 feet, putting the Luma in the midrange of results, slightly ahead of Google's OnHub (at 265.3 Mbps at 5 feet), but off the pace set by the Linksys WRT1900ACS (409 Mbps at 5 feet).

A single Luma router stayed online with a Microsoft Surface 3 tablet up to 65 feet in my suburban house with old construction and plenty of thick walls to penetrate. That's one of the shortest ranges I've seen in a router, although it emphasizes how Lumas are meant to be linked in a mesh network.

To that end, I used three devices to cover my three-floor, 3,500-square-foot house in two different ways. First, I strung three Lumas in a line on the main floor, separating them by between 30 and 40 feet for a combined range of 170 feet; the signal reached both the floor above and the one below. This range puts a trio of Lumas on a par with a single Linksys WRT1900AC. Once I got to the end of the line, though, the connection's latency increased as the delivered throughput declined.

I also set the Lumas up at roughly the same place on each of my home's three floors so that the extenders were connecting up and down from a centrally located host router on the main floor. That decreased both the loss of throughput and rise of latency.

Luma handled our informal saturation test without skipping a beat. I watched an Internet video on the Surface Pro 3 tablet while I listened to an Internet radio station on a MacBook Air and an iPad Pro played YouTube videos, all while a Samsung TabPro S was moving data onto and off of a network storage system.

Luma is the easiest router-extender combo to set up, bar none, though you will have to be patient, because each Luma takes about 10 minutes to set up, though you'll spend most of that time waiting, since everything is automatic. Like Google OnHub and Starry Station, you download an iOS or Android app — there's no Mac or PC software — and then create an account.

Luma's software asks a few questions about whether you live in a house, townhouse or apartment, how many floors you've got and where your broadband modem is. After you plug Luma in, the circular light on the router spins blue while the device is configured. When done, the light goes off, but there's no indication of progress. Rather than anxiously staring at it, I got a cup of coffee and read my book.

To add another Luma, you tap the map of a generic house in the Luma app, giving it one of six location descriptions. You can choose items like Dining Room or Bedroom, but you can't add your own descriptions (like "Brian's office," for example).

Luma's website has a goofy setup video along with a series of FAQs and Troubleshooting resources. The company's support technicians are available either online or via a toll-free number weekdays from 8 a.m. to 11 p.m. ET, and weekends from 9 a.m. to 6 p.m. On the downside, there's no place in the Luma app for you to contact the support personnel, as is the case with Starry's Wi-Fi Station app.

The Luma devices come with a one-year warranty that equals most of the networking equipment sold today. It can't match the three years of coverage the Trendnet includes with its routers, though.

Luma's app only runs in portrait mode. The main Wi-Fi screen displays the router's online status, how many devices are connected and the current upload and download speeds. Tap on the dots just below the middle of the screen to see the connected Luma devices. Icons on the bottom let you access Security (number of devices and any problems), Control (for pausing the Internet), People (list of users for setting restrictions) and Filtering (for blocking objectionable content). At any time, you can send an email to invite someone to join the guest network or add another Luma device to extend your network from the Luma app.

As advanced as the Luma devices are, there's nothing really to adjust, making it perfect for first-timer users, but a frustration for experienced networkers. You can't switch IP version 6, adjust the transmission level or turn off the system's beamforming, though Luma is working on filling in some of these gaps. [UPDATE March 22, 2017: A firmware update now lets Luma users change the devices' DNS settings.]

The router itself uses WPA2 encryption and, like the Starry Station, it can't work with older WEP devices. Luma comes with a unique network name and password, unlike many routers that come with generic passwords you need to reset.

Inside, Luma has a network address translation firewall to keep hackers at bay. On the other hand, hardcore gamers might not like the lack of performance optimization features, such as port forwarding for directing incoming connections.

Luma's parental controls are a mixed bag, but they're easy to set up. Each person can be assigned an MPAA-like rating – G, PG, PG-13, R or Unrestricted – that corresponds to the areas of the web that are allowed, though you can't white- or blacklist specific sites. (Luma is working on adding that feature, though.) At any time, you can turn the Internet feed off, which is perfect for dinnertime at Casa Nadel.

The white hexagonal Luma devices have some of the easiest parental controls to set up, and the ability to pause an Internet connection and provide good — though not stellar — performance. On the downside, Luma is expensive, with disappointing range for the price; you'll also need a phone or tablet to configure the devices. Still, if you're drawn to a mesh network that can blend into your decor, the Luma may be worth the price.