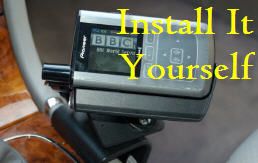 I have a confession to make: I am a satellite radio junkie with a dilemma. When I drive, I like to listen to the BBC World Service over Sirius XM Radio's satellite network. I’ve been a subscriber for eight years. But I just bought a used Mercedes-Benz station wagon, and there’s no satellite radio in it. The dealer wants over $1,000 to install one for me—that’s more than the price of my first two cars combined.

Rather than paying the dealer to install a radio that only works in the car, I’m going to put in a portable satellite radio that not only plays in the car but can be taken out for listening just about anywhere. Yes, I’m going to do this myself, and I’ll show you how.

I’m going to use the Pioneer Inno radio that works with XM’s network, but you can just as easily use the Stiletto 2 model that works with the Sirius network. Or, for that matter, this sequence works for installing an MP3 player in your car.

While some of these tasks are complicated, I’ve broken them into easy-to-digest steps. Anybody who has stripped wires to repair a headphone cable or a lamp cord can do this, too. Everything you’ll touch is protected by fuses so you won’t damage anything, and none of this will have any effect on the car’s warranty. Be careful not to damage the interior of your car while you are hiding wires (one of the last steps we’ll cover). We should also mention that, like any Do-It-Yourself project, you do this at your own risk, and Tom’s Guide and its writers are not responsible for your property.

Despite merging into one company, Sirius and XM operate separate satellites that broadcast their respective shows to earth. They both have sports, talk shows, and channels for every musical genre from hip hop to classical, while the programming costs $13 a month or about $140 for a year prepaid.

The radio, car installation kit, extra parts, and hardware should run between $200 and $250 and can be found at my online retailers.

Set aside a couple of hours to do the installation and you’ll need an electric drill, wire cutters, some nuts and bolts, electrical tape, a screwdriver, a basic multi-meter for measuring voltage and polarity (here's an example), and a tongue depressor or a flat piece of wood or plastic to hide the wires. Also, it helps to install the system with all of the car's doors open for better lighting.

Here is what you’ll need for this project:

Current page: How To: Install a Satellite Car Radio

Next Page Getting Started
9 Comments Comment from the forums