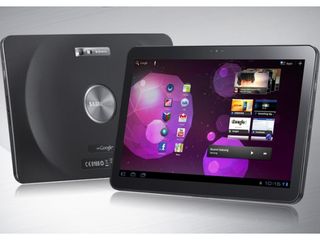 Samsung's Galaxy Tab line of tablets is already a success. With 7-, 10.1- and 8.9-inch iterations, the company has all its bases covered and caters to those looking for larger and smaller tablets, as well as somewhere in between. However, it seems seven inches is not small enough for Samsung, as the company is rumored to be launching a 5-inch Galaxy at IFA in September.

Yahoo! News Korea reports that Samsung will show off a 5.3-inch tablet at IFA 2011 in Berlin this September. Codenamed 'Galaxy Q,' the device is said to represent a 'stepping stone' between the smartphone and the tablet. Though it's not immediately clear if the device will have phone capabilities, it's said to be a cross between a tablet and a phone, so we're assuming yes. Other details, such as CPU, storage, cameras, etc., are not yet known.

Samsung's Galaxy S 2, announced back in April, measures in at 4.3 inches, which is already pretty big for a phone. Samsung's 7-inch original Galaxy tab also had phone capabilities but was, for the most part, marketed as a tablet. However, with a 5.3-inch display we think Samsung may market this one as more of a phone than a tablet. Do you think 5.3 inches is too big for a smartphone, even if it does have some tablet-like features? Let us know in the comments below!