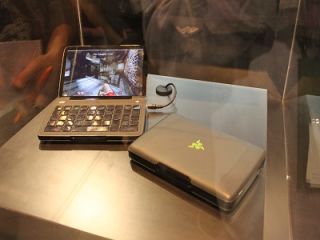 While Mad Catz has a number of brands that cover the entire gaming industry, the company is primarily known for console peripherals and accessories. It's in this vein that Mad Catz debuted its new Wii controllers, the Reactor and Reflex lines. The Reactor and Reactor plus are Mad Catz take on the Wii Remore. The Plus on the latter model designates its integrated MotionPlus technology, while the former Reactor can still take on a Wii MotionPlus adapter. As you can see form the above picture, Mad Catz is going with a very sharp, angled look with the control scheme, but it makes for a comfortable experience, and we rather enjoy this new take on the D-Pad.

The Reflex is a nice take on the Wii Nunchuk, but ultimately we are indifferent on the design and comfort when compared to the original. That said, we would buy the Reflex over the Nintendo version simply because it's less expensive at $14.99 (compared to $19.99). The general rule of thumb for the Mad Catz Wii controllers? Everything is $5 less expensive than the Nintendo controller it's based on (so the Reactor Plus is $34.99).

And for the young tykes in the family, Mad Catz also has the Micro version of its Wii controllers. The button design and map is the same, but the controller has been shrunk for smaller hands. The prices for the Micro derivatives are the same as their bigger brothers.

Mad Catz is ready for the 3DS launch with a slew of officially licensed accessories, too. The 3DS Traveler Bag can take a 3DS/DSi/DS Lite along with 21 game cartridges, 2 styli, and other accessories too (AC adapters, etc.) There is also a slimmer microsuede wallet that houses a DS along with three cartridges and a stylus. Both will be available at the 3DS launch for $19.99 and $12.99, respectively. Mad Catz will also have some great extendable/retractable styli at launch, too.

Nyko is another big name when it comes to console controllers and accessories, and they came to play at CES 2011. Their latest Intercooler, the STS 360, is new for the Xbox 360 S (the new slim version of the console). You get all the same great features of the original Intercooler, including the automatic fan speed control. We're big fans of the design of the new Intercooler STS, as it gives the 360 a sports car-like air intake without adding a lot of height or weight to the console. Look for the Intercooler STS next month for $19.99.

For the PlayStation Move, Nyko has the Power Shot (rifle) and Perfect Shot (pistol), which give you accuracy and precision with the Move when you're playing FPS titles. We had a look at the pre-production model of the Power Shot, but its ambidextrous design and solid construction shone through. Both will launch in Q2 of this year for $24.99  (Power Shot) and $14.99 (Perfect Shot). There is also a Perfect Shot for the Wii, and this model is powered by the Wii Remote itself while the Move version uses two AA batteries. Pricing and availability is the same.

Next Page Steelseries and Turtle Beach: Console Headsets for Everyone!