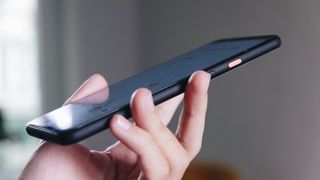 Google itself has already announced that its upcoming flagship, the Pixel 4, will support a new way to interact with the phone. You'll be able to use what's called Motion Sense, or hand gestures in the air, to control the device.

In the videos, first published by 9to5Google, you can see how the gestures Google has already described, including snoozing alarms, silencing phone calls and skipping songs, will work.

As you can see in the GIF above, you simply slide your hand across the screen to change the track.

We've seen motion controls in smartphones before, most recently in LG's G8 ThinQ, but air gestures typically feel more like gimmicks than game-changers. With LG's phone, I had to turn my hand into a claw before it could recognize my gestures.

As the leaked Pixel 4 videos show, you'll be able to swipe your hand or slide your palm over the device to interact with it, which seems more intuitive than LG's approach.

We'll find out which apps will support Motion Sense and which gestures will support it on Oct. 15, when Google takes the wraps off the Pixel 4 at its Made by Google event in New York.