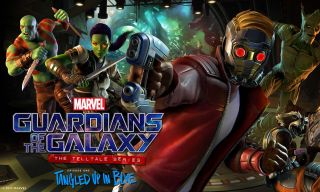 Telltale Games’ latest comic book adaptation, Guardians of the Galaxy, is excellent. And to fully understand why, you may have to accept a controversial postulate: The movie wasn’t that good to begin with.

I know, I know. Between Chris Pratt, a mildly amusing script and a judicious application of Blue Swede, Guardians of the Galaxy was the feel-good hit of 2014. Marvel demonstrated that it could turn any of its properties into a massive box-office smash — even a second-tier string of Fantastic Four hangers-on whose ranks include a braggadocious racoon and an ambulatory tree.

Time and distance, though, have (hopefully) returned our critical faculties to us, and we can now see Guardians of the Galaxy for what it was: a clichéd space opera that turned a fairly serious comic book storyline into an interminable cavalcade of lame jokes and predictable character arcs.

Without a painstaking rehash of a three-year-old argument about the film’s quality, its biggest problem was that it simply refused to take risks. The same cannot be said of Telltale’s new video game adaptation.

Sure, the point-and-click adventure gameplay is exactly what players have come to expect from the company. You’ll still split your time between choosing dialogue that shapes the story and mashing buttons for action events, just as in Telltale’s take on other comics, such as Batman, The Walking Dead and Fables.

But where it really counts — the story — Telltale is willing to play with expectations and move things forward in dramatic ways. Furthermore, it’s willing to introduce real friction between the team members and a villain with understandable motivations, neither of which was true about the film.

The first episode of Telltale’s Guardians of the Galaxy is called Tangled Up in Blue, and it’s not the last classic rock song you’ll hear referenced. Most players should be able to wrap it up in under 2 hours, but it sets a potentially fascinating stage for the next four episodes.

If you’ve seen the movie, read the comics or watched the cartoon (although the game is not explicitly set in any of those continuities), you should be familiar with the setup. Earthling adventurer Star-Lord, green warrior woman Gamora, trash-talking carnivoran Rocket Raccoon, foliate do-gooder Groot and literal-minded bruiser Drax the Destroyer are intergalactic crime fighters (and criminals) known as the Guardians of the Galaxy. Whether they’re on the right or wrong side of the law, they’re always tangling with spacefaring threats — like the Mad Titan Thanos.

When I realized that Thanos was going to be the main villain of the game, I settled in and braced for disappointment. Thanos is a good villain (particularly if you can track down the 1991 Infinity Gauntlet miniseries), but only for a very specific type of cataclysmic, world-ending crossover story.

At the beginning of the game, I took control of Star-Lord, in all of his wisecracking glory. After conferring with the Nova Corps (Marvel’s space cops), Star-Lord agreed to lead the Guardians to foil Thanos’ latest scheme, which involved a powerful artifact that could destabilize the galaxy, and so forth. I assumed that some obstacle would crop up, postponing the inevitable confrontation with Thanos for four wheel-spinning episodes.

Well, you know what they say about making assumptions.

Without spoiling what happens next, the first 20 minutes of the game subverted my expectations in the most delightful way possible. The story is decidedly not about “a team of superheroes who have to stop a galactic threat.” Instead, the focus shifts to a much more interesting question: What keeps a team together? I had to make at least two critical decisions. The first alienated Rocket Raccoon, and the second alienated Drax the Destroyer. As in Telltale’s other games, there is no way to keep every single character happy, and that gives your actions some real weight.

MORE: PS4 vs. Xbox One: Which Console Is Right for You?

Spirit in the Sky

As stated above, the world-ending galactic conqueror villain works only under very specific circumstances. It’s a good thing, then, that Thanos is not the only threat the Guardians have to deal with in Telltale’s game. Comic book fans should be pleased with Telltale’s choice: a relatively new Marvel character who has never before appeared in film or game form.

While you’ll want to find out the new villain’s identity for yourself, Telltale develops and humanizes her in a way that the film never did for its antagonist. Marvel films are not generally known for their great villains, but Guardians of the Galaxy's Ronan the Accuser (the incomparable Lee Pace; not since Mickey Rourke has Marvel so spectacularly wasted a fine actor in a forgettable role) was a new low.

Ronan was entirely the wrong kind of villain for the film; you don’t pit a group of jokesters against a self-serious despot, or else you wind up with something as tonally deaf as, well, a dance-off with a character who could destroy entire worlds. You’ve got to laugh at the scene — but because it’s absurd, not because it’s actually funny.

By contrast, the Telltale game also takes time to give its villain a believable backstory, a conflicted personality and a goal that intersects with Star-Lord’s in a personal way. (There were no personal stakes for Star-Lord in the film beyond saving a galaxy where he happened to also live.) There’s also a desperate five-against-one battle that, frankly, puts the movie’s action scenes to shame.

Fooled Around and Fell In Love

If I haven’t talked much about the game up until this point, it’s only because I don’t want to spoil the things that made me enjoy it so much. I already knew that the dialogue would be good, that I’d get to shape the story in interesting ways and that I’d have to solve a few simple puzzles to advance the plot; those elements have never been in short supply in Telltale titles. I knew that the voice acting would be inspired and the graphics would be attractive (although, fair warning: I encountered some frame-rate issues in the Steam version, as well as some ridiculously long load times when first starting the game).

What I didn’t expect was that the game would make me genuinely interested in one of my least favorite Marvel teams, or that it would craft a much more interesting narrative than the film that put the Guardians on the general pop culture map. Telltale seems to understand that while the comic book iteration of the team has always been funny, it’s also been part of a much larger cosmic storyline with far-reaching, serious consequences.

The game also understands that big villains and huge action scenes are not the only ways to raise the stakes in a superhero story. Team squabbles and character backstories can be just as intense, provided that you intersperse them with more traditional action. Here, the game succeeds where so many other superhero stories have failed.

The first episode of Guardians of the Galaxy isn’t perfect. It could have used a few more puzzles, and the setup is just a little too arch. Still, it shows just how much fun you can have with a property when you’re not tied down to a multibillion-dollar cinematic universe.