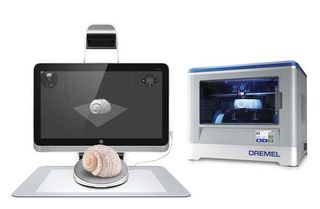 HP Sprout owners will soon have new 3D scanning capability and an optional accessory to help with the process. Today (June 11), HP announced that a July software update will let users perform 360-degree captures of small objects which they can share digitally or 3D print. To make the process easier, the company also announced the $299 3D capture stage which rotates objects for you.

The $1,899 Sprout all-in-one comes with a downward-facing RealSense camera that scans 2D or 3D objects that you place on its Touch Mat, a flat surface that goes in front of its screen. When it launched last fall, the Sprout was able to capture only one side of an object. In an October demo, an HP exec scanned an alien doll and created a 3D object on screen, but one that was missing the creature's backside. The new software unveiled today allows the 23-inch PC to scan all sides of an object.

Users will be able to do the 360-degree scans without buying any additional hardware, but the 3D Capture Stage turns objects for them, enabling faster and more accurate captures. Once you've captured a 3D object, you can share it online via email or Facebook, print it on your own 3D printer or send the file to a printing service.

HP says that it's working with Dremel to make the Sprout work seamlessly with that company's 3D Idea Builder printer. The company also announced that it is working with some printing services but did not announce any particular partners.

If you don't want the Sprout and HP's proprietary software or if the prospect of spending $1,899 or $2,299 (with the stage) sounds too expensive, you can also consider a dedicated 3D Scanner. Cubify makes a handheld 3D scanner, the Sense, that goes for $379 and MakerBot sells its Digitizer with a rotating platform for $799.