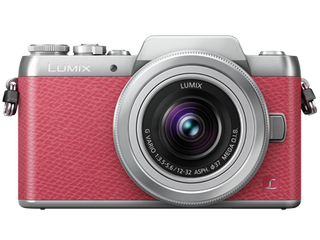 With selfie an official Oxford Dictionary word and powerful enough to cause a Mideast politcal row at the Miss Universe contest, camera makers have to keep pace. So Panasonic has joined the pack today with its Lumix GF7, a $600 (with 3X zoom lens), 16mp mirrorless camera with a flip up, 720 x 480 LCD screen so you can frame your mug shot. The GF7 is available in both black and an Ellie Woods-reminiscent hot pink.

Like the $550 Fujifilm X-A2 mirrorless selfie-oriented camera announced last week, the GF7 looks to be a solid midrange model. It's micro four thirds sensor (about 60 percent the size of the Fujifilm's or a mainstream DSLR's) boasts a respectable ISO 25,600 max light sensitivity and new processing that Panasonic claims significantly reduces graininess, especially on skin. That's a good thing, since using a flash with the camera at arm's length would be nearly blinding.

The GF7 offers some selfie-friendly features resembling those that the more exotic cellphones provide. Face Shutter activates when you wave your hand across your face; Buddy Shutter takes a shot when the camera senses two faces in the frame. Using a Wi-Fi tethered smartphone; a new feature called Jump Shot senses when you've reached the highest point in a jump and triggers the camera to snap a picture of you in the air.

Panasonic eschews the DSLR style phase-detection autofocus that is common in mirrorless models from Fujifilm and many other camera makers. But Panasonic claims that its breed of contrast detection, which samples the scene and sends data to the lens 240 times per second, is plenty fast and even more accurate. It also claims good low-light performance, which is where contrast detection often falls down.

Other highlights include impressive video capabilities, with settings for full HD 1920 x 1080 at a smooth 60 fps as well as the slightly blurred 24fps that most feature films are shot at. The GF7 can record in either the very high-quality (and data hungry) AVCHD or the more compact MP4 format. Some of Panasonic s newest cameras go more Hollywood style by capturing video at ultra HD, but again, the GF7 — like the Fujifilm X-A2 — is a midrange camera.

The GF7 is expected to ship out in February and available for pre-order now on Panasonic's website. The Fujifilm X-A2 also drops in February. It will be interesting to see how the two selfie cams compare.