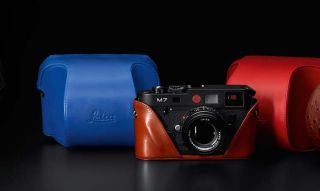 The list of companies still making 35mm-film cameras is fading fast. Many photographers rely on eBay for used analog cameras, but what if you want one that's shiny and new?

Fear not. Here's our roundup of manufacturers that refuse to give up on the 35mm-film camera.

Nikon is the last company that still churns out high-end SLR cameras, and it  makes only one model – the F6. With a price tag of $2,449, this camera doesn't come cheap, but it's a steal compared to a new Leica rangefinder. The F6 is compatible with every Nikon lens made since 1977, and it can record your camera settings (EXIF data) to a CF card.

Leica rangefinders were the cameras of choice for legendary photographers such as Henri Cartier-Bresson, Elliott Erwitt and Nick Ut. The brand is iconic in the world of 35mm-film photography, and it still produces three analog cameras today – the MP, the M7 and the M-A (Typ 127).

The cameras are known for their compact size, classic design and quiet shutters. With apertures as low as f/1.25, Leica's M-system lenses are among the fastest in the industry.

Quality doesn't come cheap, though. The least expensive of the bunch, the M-A, costs $4,450 — without a lens.

Kodak and Fujifilm are still making their classic disposable cameras. The Fujifilm QuickSnap Flash comes pre-loaded with 400 ISO film and is available in a two-pack on Amazon ($13). Kodak's Funsaver has 800 ISO film and costs $16 for a two-pack. Both companies also produce waterproof models that can shoot at depths of 17 feet (Fujifilm) and 50 feet (Kodak).

For those seeking a more artsy aesthetic, Ilford makes a single-use camera that comes pre-loaded with 400 ISO black-and-white film that can be developed using a C-41 process – meaning you can drop off the camera anywhere that accepts color film.

If you love vignetting, funky colors and multiple exposures, there are plenty of new 35mm-film cameras available from Lomographic Society International (LOMO or Lomography for short). The society has designed a number of unique models, but these toy cameras prize creativity over quality.

Popular designs include the La Sardina ($99), which comes with colorful flash filters, and the Diana Mini ($53), which has the ability to change between square and half-frame formats. For ultra-wide-angle photography, consider LOMO's LC-Wide ($370), which has a built-in 17mm lens, or the 10mm Fisheye Camera ($55). Lomography also produces its own 35mm films.

Get them before they're gone

A handful of 35mm-film cameras that were recently discontinued can still be found in stores. Lomography enthusiasts should check out the Holga 135BC ($90), which was adapted from the iconic Holga 120N medium-format camera. If you want a rangefinder and can't afford a Leica, try getting your hands on a Voigtlander Bessa-R2M ($900) or R4M ($1,000). Both models lack autofocus and auto-exposure capabilities, so buyers should be comfortable using nothing but manual settings.