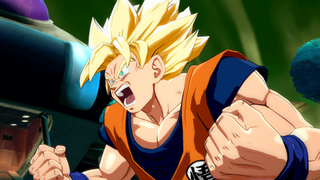 While the quality of its online experience remains to be seen, FighterZ is a stylish, well-rounded package that shows a ton of potential for both competitors and anyone who simply wants to mash buttons and feel like a Super Saiyan.

Editors’ Note: This review does not yet have a rating because we are waiting to evaluate online play.

Dragon Ball FighterZ is one of the most gorgeous, well-presented fighting games I've ever played. To say the action looks ripped right out of the Dragon Ball anime would be an understatement -- with fluid animation and stunning, cel-shaded 3D character models, the game's graphics often go above and beyond the source material.

Take a character out with a heavy attack, and you'll send them flying into a nearby building. Lose one of your fighters, and you'll see an epic mini-cutscene of your next one charging into battle. End the fight with the right screen-filling fireball, and you'll knock your opponent off of the planet. Dragon Ball FighterZ is a fan-service bonanza that seems designed to make every match feel like an episode of the show.

Fortunately, DBFZ has more than good looks going for it. FighterZ' combat is fast and fluid, taking some core components of Arc System's Guilty Gear games, sprinkling in a bit of Marvel vs. Capcom, and distilling it all into a chaotic 3-on-3 tag brawler that's wonderfully accessible without sacrificing depth.

The game's auto-combo system allows you to perform flashy attack chains by mashing buttons, though you can rack up way more damage if you take the time to craft your own strings. Double-jumps and air dashes offer plenty of freedom of movement, and assist attacks give you a myriad of ways to pile on the offense.

FighterZ' combat system might initially seem linear compared to similar tag fighters such as Marvel vs. Capcom: Infinite, but the game's depth started to reveal itself as I dug deeper. DBFZ offers a big toybox of offensive and defensive tools that includes assists, teleporting "vanish" attacks, grabs and a tide-turning "sparkling burst" move. I've had a blast finding ways to combine all of these techniques together, and I'm eager to see what kind of devious strategies fighting game pros create with them as the game evolves.

It certainly helps that Dragon Ball FighterZ' 21-character base roster feels remarkably diverse. You've got well-rounded brawlers like Goku and Vegeta, big bruisers such as Captain Ginyu and Android 16, and trickier, more technical fighters like Trunks and Beerus. Even universal moves such as heavy attacks and Ki Blasts can vary wildly different between characters, and each fighter's unique assist move adds a ton of strategy to team building.

If you're expecting Dragon Ball FighterZ to have a sweeping cinematic story mode in the vein of Injustice 2 and Tekken 7, you might be disappointed. However, what the game's solo campaign lacks in bombastic cutscenes and seamless fight transitions, it makes up for with its interesting, RPG-like structure.

FighterZ' story mode has you move your characters along a series of board-game style maps, strategically picking your battles, gaining new allies, and leveling up your fighters along the way. The whole thing feels meaty, with multiple paths and unlockable side stories, and doubles as a solid tutorial that steadily introduces new mechanics and fighters.

The plot — which involves you, the player, somehow inhabiting the bodies of various Dragon Ball characters — is fairly ridiculous, and the static conversation scenes in between fights aren't exactly engrossing. Still, there's a goofy charm to the dialogue that feels true to the anime, and the special conversations that trigger when you pair up certain characters are a delightful bit of fan service.

Story aside, FighterZ comes with the requisite suite of fighting game modes, including an arcade mode, local multiplayer and a robust training mode complete with a helpful tutorial and various combo challenges. Regardless of how you play, you'll earn Zeni: an in-game currency that lets you buy capsule boxes filled with cosmetic items such as colors, titles and cute Chibi avatars to use in the game's lobby. And before you panic about the game having loot boxes, know that Zeni can only be earned by playing.

While FighterZ offers plenty of meat for offline warriors, that's only half of the equation. The game's online portion, which wasn't available during this pre-release review period, could make or break the game in the long run. It does seem promising, with ranked matches, casual matches, lobbies and even a 6-player team battle mode, though time will tell how they all hold up in a live environment.

During my extensive time with DBFZ's various online betas, I experienced mostly lag-free matches -- when the servers worked, least. I'm eager to see how FighterZ holds up once the game hits the wild, and will report back once I do.

In a console generation already loaded with great fighting games, Dragon Ball FighterZ manages to stand out as one of the strongest. It just might be the best-looking 2D brawler ever made, and is filled with moments both in and out of combat that feel specifically designed to make hardcore Dragon Ball fans squeal with glee. The game's fighting system is pure, frenetic fun, and shows a good amount of strategic potential for folks who want to take it seriously.

If you're looking for a fighting game stuffed with fun offline content, Dragon Ball FighterZ is an easy recommendation, and second only to Injustice 2 in terms of compelling solo modes. But for the competitive crowd, FighterZ will ultimately live or die by its online component, so be sure to check back for our final verdict once Bandai Namco's over-the-top fighter hits the wild.