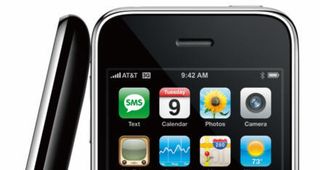 Steve Jobs, dressed in his signature black turtleneck and jeans, rode the blogger buzz and presented his gift to world today – the new iPhone 3G. The new iPhone, as one can deduct from the name, will feature 3G-network support, GPS, and most importantly a lower price point. As for aesthetics, the same display will be used, but overall the new phone will get a flushed headphone jack, a black plastic back, and will be slightly thinner. Apple claims the new iPhone will be almost three times as fast as the old iPhone, and is 36% faster than current 3G phones on the market. An estimated 300 hours of standby, 5 hours of talk time, 6 hours of internet browsing, 7 hours of video, 24 hours of audio. Now, drum roll please, the iPhone 3G 8 GB model will have a price tag of $199. A 16 GB model will also be available at $299 with an option of a black or white back. Apple fans will be able to get their hands on the hardware on July 11th in 22 countries. A total of 70 countries will get the phone in a rollout over the next few months.

Because Apple’s web site stipulates that the purchase of an iPhone 3G requires a 2-year subscription to an AT&T service plan sold separately, it appears that existing AT&T customers (such as those that purchased the first iPhone) will be required to renew their contracts with the carrier to add an additional two years of service in order to activate the iPhone 3G.

Of course, for those interested in using the new iPhone as a business tool, rest assure that it will support all of the new enterprise features set into motion a few months ago. Exchange support, push email, contacts, calendars, global address books, and remote wipe will all be part of the new enterprise features. According to Apple, over 35% of Fortune 500 companies signed on for the enterprise beta program in January. While the percentage is relatively low compared to Research In Motion’s grasp on the enterprise market, it is definitely a sign the Canadian company may need to call a huddle and re-strategize their approach for this market.

Along with the new enterprise features, Apple will be launching iPhone 2.0 software in July that will be providing iWork and Office document compatibility, live search for contacts, bulk delete and move for messages, ability to save received images, scientific mode for the calculator, parental controls, and new Asian language support. The software update will be free for iPhone users and will cost iPod touch users $9.99.

The new applications section of the iTunes store features a plethora of titles. For the mobile gamer, fear not as developers have not forgotten about you. Apple demoed Sega’s Super Monkey Ball, and Pangea’s Cro-Mag Rally racing game that uses the iPhone as a steering wheel. The games will be available at launch for $9.99 USD. Other software titles such as AP’s Mobile News Network and Loopt, a location-aware social networking app, will be available free of charge.

Another point of interest, Apple will be launching MobileMe.com, a blend of .Mac and ActiveSync – at least the positive features from both applications. Rumors have been swirling about a .Mac refresh and this will be it. Me.com will allow users to instantaneous sync calendar, contacts, and photos wirelessly across three platforms, Mac, iPhone, and Windows. Current .Mac subscribers will automatically be upgraded, while full service will be priced at $99 a year. A 60-day free trial will be available along with the iPhone 2.0 software this July.