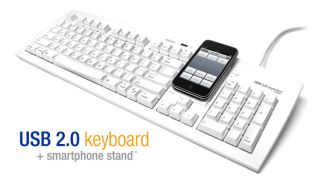 Web surfers who use the PC and a smartphone at the same time may find Matias' new USB 2.0 keyboard to be an interesting tool. Taking its design cue from the Asus Eee Keyboard, Matias has created a special place for users to mount their smartphones on a stand between the QWERTY keys and the number pad.

But unlike the Asus Eee Keyboard, this peripheral doesn't offer a built-in touchscreen or processing components. In fact, it's just a keyboard with a slot for a phone.

"This new setup is so convenient," said Edgar Matias, CEO of Matias. "I have all these little apps on my iPod that I use all day. With the new keyboard, they're in easy reach, all the time."

For Apple iPod users, this would be ideal when using Logitech's Touch Mouse app that turns the device into a wireless trackpad (and keyboard). Smartphone users in general could have quick access to useful apps such as the calculator, the calendar, or even chat clients without having to clutter the PC's desktop space.

Matias said the concept originated from Jesus Diaz over at Gizmodo. "It's a little different from Jesus Diaz's idea," he said. "We tried several locations for positioning the smartphone stand. Ultimately, we found that having it just above the arrow keys was the most comfortable, especially when you just want to use the keyboard."

The keyboard is now available online for Mac at $49.95. The PC version is coming soon--presumably with Windows shortcut keys instead of OS X keys.