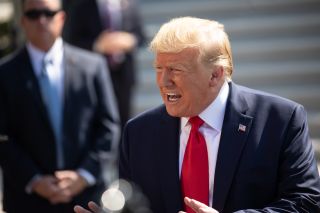 Update 4:00 pm ET: We've added a reference to the list of items affected by the delay, released after the USTR's initial announcement along with a comment by the president and a comment from the CTA.

The United States Trade Representative (USTR) announced today that it will delay tariffs on certain products imported from China, including cell phones, laptops, and video game consoles, until December 15.

On August 1, President Trump announced a 10% tariff on the remaining $300 billion worth of Chinese imports—notably centerpiece technology—excluded from the original trade talks. He said the new tariff would go into effect on September 1.

During the USTR’s public comment and hearing process on the proposed expansion, "it was determined that the tariff should be delayed."

"Certain products are being removed from the tariff list based on health, safety, national security and other factors and will not face additional tariffs of 10 percent,” the USTR said.

You can read the entire list of items included in the December 15 tariff delay here.

You’ll notice smartwatches, wearable fitness trackers, and Bluetooth audio devices are not on the December 15 delay list. Tariffs on those items will go into effect on September 1, as scheduled.

“Next month, we’ll begin to pay more for some of our favorite tech devices,” said Gary Shapiro, president and CEO of the Consumer Technology Association (CTA).

The December 15 delay allows some devices to reach the U.S. without tariffs in time for the holiday season, which was a prominent point of concern for game console manufacturers. According to a joint letter filed by Sony, Nintendo, and Microsoft in June, a tariff-caused rise in cost would have "likely put a new video game console out of reach for many American families," during the 2019 holidays.

Speaking  to reporters, the president confirmed that the holiday shopping season influenced the decision to delay the tariffs. "We've delayed it so it won’t be relevant to the Christmas shopping season," Trump said. Previously, the president insisted that China is paying the cost of his tariffs, not U.S. consumers — a claim most economists dispute.

“Tariffs are taxes. The Chinese government doesn’t pay for them – Americans bear the burden,” Shapiro said.

The delay incited an instant sign of relief for manufacturers and retailers. Following the announcement, Apple shares (which had plummeted after Trump's August 1 tweets) rose 5% higher and Best Buy’s increased more than 8%.

In the press release the USTR said it will specify which items are affected by the delay. We will update this story as it develops.