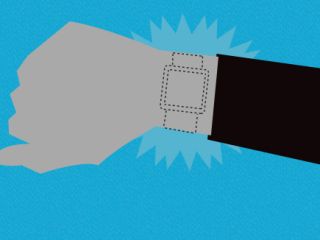 Even without an iWatch on the market, wearable devices have been attracting a lot of attention as the next generation of portable electronics. In fact, ABI Research predicts that 90 million wearable computing devices will be shipped in 2014, mostly driven by health and fitness gadgets. Not surprisingly for a category in its infancy, wearables show promise, but much work needs to be done before we're all wearing these gadgets on our wrists.

To provide a better sense of how far we've already come — and where we need to go — I've broken down wrist-based devices into three groups (fitness gadgets, feature watches and smartwatches) to highlight the challenges faced by each. Here's what can be done to truly make wearables the tech of the future.

This category includes devices ranging from the $50 Fitbit Zip to the $149 Jawbone UP24. (I'm excluding dedicated GPS running watches, as they're made for more of a niche audience.) Designed to provide a little motivation to get people off the couch, these gadgets track such things as your steps and the quality of your sleep.

So, what's wrong with fitness bands? According to a recent survey, users stop wearing them after a month. Why? It's the same thing as the rush of gym memberships in January. Once the guilt of being out of shape wears off, there's no incentive for people to continue wearing the devices. Besides, there are plenty of free apps for your phone that can accomplish the same thing as fitness trackers can.

When a company like Nike decides it's not worth the investment, you know there's something unsustainable about the business model.

Recently, fitness bands such as the Withings Pulse have been incorporating additional sensors, such as heart-rate monitors, in an effort to add an extra metric. Unless you're already committed to working out, though, having yet another data point isn't going to keep you interested.

There are two directions to pursue with these devices: Either make them smaller and more stylish, like the Misfit Shine, so that they're more of a fashion accessory and virtually disappear when you're wearing them; or, add some basic smartwatch-like functionality, such as an always-on clock, or the ability to control music from your wrist. For all its other faults, the latter is one of the features we like on the LG LifeBand.

These not-quite smartwatches include such devices as the Cookoo, Martian Notifier and Casio STB-1000, which show notifications from your smartphone and allow you some basic control, such as changing music tracks. Price-wise, they're generally in the $100 to $200 range, in between fitness bands and full-fledged smartwatches. The great thing about these devices is that, because of their low power requirements, they'll last years without needing a recharge.

However, the functions on these wearables are pretty limited. Just reading a tweet on one of those watches' miniscule displays is an exercise in tedium, so the person who opts for one of these devices should be looking for a watch first, and a smartphone accessory second. As such, these watches need to look better. No offense to Casio, but I'd rather have a Fossil or a Tag Heuer delivering messages to my wrist.

At the high end of the wearables spectrum are smartwatches, which start at $149 for the Pebble and go as high as $299 for the Samsung Gear 2. Both are works in progress.

First off, any smartwatch better show the time constantly, not just when you lift up your wrist. Second, you need to be able to make calls from the watch. Dick Tracy figured this out nearly 70 years ago.

Next, you need to make sure the watch works with lots of smartphone apps. Pebble, with its library of more than 1,000 apps, has figured this out. Everyone else has not.

Finally, a smartwatch has to be able to work with a wide variety of phones, not just the latest and greatest from one company. Samsung's Gear 2 can be paired only with Samsung phones, but the Pebble works with other Android devices, as well as iOS.

I'm particularly confused by Samsung's strategy, as it can't seem to decide what operating system to use. The original Gear ran a modified version of Android. The Gear 2 runs Tizen. This summer, the company is expected to introduce a third smartwatch that uses Google's Android Wear OS. And, even more recently, Samsung announced a fourth OS, the Samsung Architecture for Multimodal Interactions (SAMI), which will be used on its Simband fitness tracker. Pick one, please.

As these devices go up in price, companies need to make a much stronger argument as to why people should shell out $200 or more for a smartwatch. One of the advantages of the Pebble is that at $149, it's relatively inexpensive. However, I find it harder to justify the price for the $299 Gear 2, or the $249 Moto 360.

Ultimately, none of the companies making smartwatches have yet to provide a compelling reason why we need yet another gadget. There has to be more to a smartwatch than its ability to let us keep our phone in our pocket. Imagine, for example, a smartwatch that integrates with Google Maps so you can find your way around a city without looking like a tourist, reads you cooking instructions while you're in the kitchen and lets you control your thermostat.

Want to increase the staying power of fitness bands? Imagine if consumers could lower their health care insurance premiums or health club membership fees by using a band to report how active they were.

The big wild card in all of this, of course, is whether Apple comes out with its own smartwatch, now rumored for October. Whatever features it introduces will have to be at least matched by rivals.

But until these companies — Apple included — do some serious thinking about what people actually want in a smartwatch or fitness band, all of these devices will just be marking time.