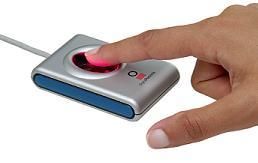 You can add a fingerprint reader to any PC, either as a USB peripheral that can cost as little as $30, or a unit built into a keyboard or mouse. Typically these work with Windows and Internet Explorer; some support Firefox as well. The EIkon Digital Privacy Manager and the Sony FIU600/M Puppy are the only readers so far that work on a Mac.

Save on USB ports with a fingerprint reader built into a keyboard like this Microsoft Optical Desktop.

SanDisk’s Cruzer Profile is a fingerprint scanner and chunky 1GB USB flash drive in one; any files on the drive are locked to your fingerprint, and it can store passwords as well. You can get a 1TB hard drive from La Cie with a fingerprint sensor, although this only locks the data on the drive, not the PC to which it’s connected

Many newer notebooks include a fingerprint reader, and they’re particularly useful on tablet PCs and UMPCs. If you don’t have a keyboard or the keyboard is folded away, logging in with a swipe of your finger is faster and easier than pulling out the pen and tapping away letter by letter. But even when you can type your Windows password at high speed, logging in with a fingerprint reader makes your life easier, because the same software that logs you into Windows can log you into all the Web sites and services for which you usually have to remember usernames and passwords.

Biometrics isn’t just for business: HP is putting fingerprint readers on consumer PCs like the TX1000.

That doesn’t make your system more secure by itself, but when you have to remember a lot of usernames and passwords and keep typing them in every time, many people use the same ones every time, and they make them short and simple-this means that if one account is compromised, everything is compromised. Storing passwords in a system that’s locked to your fingerprint means that instead of picking and reusing easy passwords that you can remember, you can choose complex and secure passwords, record them somewhere secure in case of problems, and then forget them. Once you’ve logged into Windows with your fingerprint and logged into each site once, the fingerprint security software will automate all your logins.

The only sites this kind of software won’t be able to cope with are banking sites that ask for different letters from your password each time, or ones where you have to select digits for your PIN using an on-screen keypad that changes its layout. If the site has a fixed list of security questions and asks you a different one each time, good software will be able to store all the answers and replay the correct one as needed. Some software, like the DigitalPersona utility that comes with the Microsoft Fingerprint Reader, asks you to swipe your finger for every site you want to use; other utilities ask you to confirm if you want to automate your login to a site the first time you visit it, and then log you in automatically on future visits.

You’ll want to have a standard Windows password as well, in case you run into problems. You can rescan a finger if you get a permanent scar, but note that even a cut that doesn’t break the skin enough to draw blood can interfere with recognition-as would a bandage on your finger. To avoid being locked out, scan several fingers, but have a password as backup too. Since you won’t have to type it every day, and since your account will have automatic access to banking and other confidential information once someone is logged in, make sure it’s a strong password that can’t be guessed easily, like the initial letters of a long sentence, with added punctuation and digits. There are a handful of phones and PDAs with fingerprint sensors, including the LG LP3800 and Toshiba’s Portégé Windows Mobile phones like the G920. Siemens brought out the first fingerprint-protected mobile phone in 1999.

The first mobile phone with a fingerprint scanner was made by Siemens in 1999.

Current page: My Thumb is My Passport: Using Biometrics