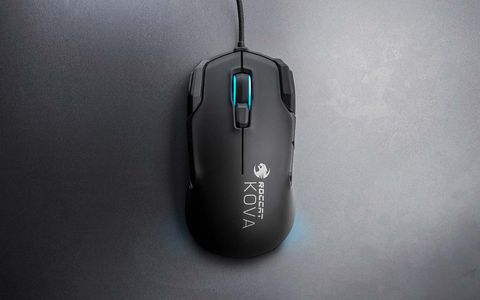 When I reviewed the original Roccat Kova mouse, I praised the device for its ambidextrous design and comfortable feel, while criticizing its uneven software.

The good news is that the Roccat Kova Aimo ($50) feels just as good and performs just as well as before, and it even costs $15 less than the previous version. Unfortunately, four years later, the software is not much better, and the Aimo upgrades don't add all that much.

If you're familiar with the original Roccat Kova, you're already familiar with the Kova Aimo. It sports the exact same white chassis, measures the same 5.2 x 2.6 x 1.5 inches and weighs the same 3.5 ounces. That's admirably lightweight, although it's worth noting that the Kova Aimo is very low to the ground. If you favor a palm grip and have big hands, you may want something larger, or more ergonomic.

The Kova Aimo also features the same button layout as its predecessor. There are two thumb buttons on either side as well as one "quick-fire" top button right above those. You'll also find a clickable scroll wheel and a dots-per-inch (DPI) sensitivity adjuster in the center of the mouse.

What makes the Kova Aimo noteworthy is not so much the ton of buttons it has, but rather their locations. The Kova Aimo is a perfectly symmetrical device, meaning that you can use it in either your right hand or your left. It's just as comfortable and efficient either way. Most gaming mice cater only to right-handed players, and a lot of ambidextrous designs sacrifice extra buttons or comfortable grips in the name of symmetry. The Kova Aimo does not fall prey to these traps; it's simply a good mouse that just happens to fit perfectly in either hand.

Unfortunately, after a rocky launch four years ago, the Roccat Swarm software is not a whole lot better today.

First off, the Swarm software is incredibly hard to install and update. Just about every time a new Roccat product comes in for review, I go through the same dance: Launch Swarm, try to use the automatic updater, find that the automatic updater crashes the program, restart my computer, run the program as an administrator, shake my head as the Swarm update hangs indefinitely, uninstall Swarm, install a clean version from the website, sacrifice a chicken to appease the great serpent Xiuhcoatl, run the in-app updater again, and simply hope for the best. This time, the process worked; sometimes it doesn't.

MORE: 15 Cheap Gaming Mice ($25 and Under) Ranked from Best to Worst

I have no idea why Roccat Swarm is so hard to get up and running, but I really expected it to be more stable after four years on the market.

Once it's installed, Swarm is perfectly acceptable, although it's still not quite up to the standards of similar programs like SteelSeries Engine and Logitech G Hub. You can set DPI levels, program the various buttons and even toy with more esoteric options, such as scroll and click speeds. You can also program up to five onboard profiles and as many other stored profiles as you like — useful if you want to assign different options for your whole game library.

The Aimo is Roccat's "intelligent lighting system," which procedurally generates color patterns for your Roccat gear as you play different games.

In theory, it's very cool, since you'll get an organic lighting experience for every game you play. In practice, though, it's a bit hard to see on the Kova Aimo, since the only lighting zones are right next to the scroll wheel and underneath the palm rest. In practice, I didn't look down at my mouse once while playing a game. Maybe it's more entertaining when you sync Aimo lighting with a Roccat keyboard, but it's still not a make-or-break feature, in my estimation.

In keeping with its versatile design, the Kova Aimo works well with just about any game genre. I ran it through Destiny 2, StarCraft: Remastered, Thronebreaker: The Witcher Tales and World of Warcraft, and found that it performed equally well in every case. You can gun down legionaries in Earth's demilitarized zone, or command a Zerg army to tear through Protoss structures, or help Queen Meve build the perfect deck of cards to take down a wyvern; and it all happens with speed, precision and accuracy.

My only caveat here is that if you're buying the Kova Aimo because it comes with a lot more buttons than most $50 mice (10, to be exact), be aware that they're not all accessible at once. The three buttons on either side of the mouse are there just to offer the same options to both right- and left-handed players; it's extremely hard for the average gamer to employ both of them, especially during a fast-paced gameplay segment. If you want to have a ton of buttons that are all under the same thumb, you might be better off with something like the Roccat Nyth.

The Roccat Kova Aimo isn't that much different from the original Kova, but it also didn't have to be. The mouse is extremely well-designed and relatively inexpensive. It performs well across a variety of genres, and it's easy to hold for long periods of time. I wish the software were better, and it's not quite as ergonomic as a dedicated right- or left-handed mouse. But it's easily one of the best ambidextrous models on the market, and that's good news, no matter which hand you favor.