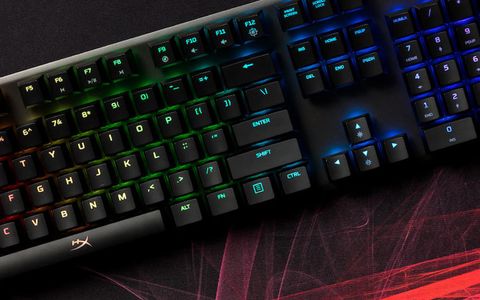 The HyperX Alloy FPS RGB performs well, but it leaves out a number of useful premium features.

Ever since HyperX started expanding beyond headsets a few years ago, the company has been all about delivering a premium experience at sub-premium prices. The HyperX Alloy FPS RGB keyboard ($110) gets the pricing correct, but the "premium" part is a bit more debatable.

The Alloy FPS RGB delivers a specialized esports experience with gorgeous rainbow backlighting, at a much lower cost than you'd expect for a full-size RGB mechanical keyboard. At the same time, you'll have to put up with touchy software, so-so key switches and a distinct lack of bells and whistles. If you want to use the Alloy FPS RGB for high-level competitive multiplayer, and nothing but, it'll get the job done. But if you're going to spend more than $100 on a keyboard, you may ultimately want something a little more versatile.

The Alloy FPS RGB is most similar in design to the HyperX Alloy FPS keyboard. (We reviewed its tenkeyless variant, the Alloy FPS Pro.) This full-size keyboard measures 17.4 x 5.1 inches, making it agreeably small, as these things go. A black plastic chassis sits underneath the slightly elevated key caps. The whole product looks unobtrusive, which is probably what HyperX was going for.

On the other hand, the device’s modest design also means it lacks a few handy extras. There's no wrist rest included (although HyperX sells a decent one for $20; there's no magnetic attachment, of course) and no dedicated media keys. These might not be that important if you're really only going to use the keyboard for tournament play. But generally speaking, high-end gaming keyboards should double as everyday peripherals, and wrist rests and media keys are major sources of convenience.

One nice touch in the Alloy FPS RGB is the detachable power cable. If you're planning to transport the keyboard often, the power cable is a huge potential point of failure. Rather than bend and crush it, you can simply detach it, wrap it up and reattach it once you get where you're going.

On the other hand, the cable can be a bit of a pain as well. There's an optional USB pass-through — which is good — but you can use it only to charge mobile devices — which is disappointing. The cable is a bit weird, too, splitting the USB attachments about 5 inches away from the bottom of the cable. That means that if you plug in both halves of the cable, you'll get an ugly loop of wire just waiting to get snagged on something.

These mechanical switches do their best to mimic the Cherry MX Speed (Silver) switches, in that they are linear and have an extremely short key travel. As for whether they're as good as Cherries — there are entire Reddit threads that attempt to unravel it, but in my experience, they're not. Kailhs are fine, but they almost always feel a little stiffer and less responsive than the real deal, and the Silvers are no exception. Granted, they're probably one reason the Alloy FPS RGB costs $110 instead of somewhere in the $150 range, so the pricing is more than fair.

What sets Silver switches apart from the more traditional Reds, Browns and Blues is their extremely short actuation distance: 1.1 millimeters, compared with about 2 mm for the other colors. In theory, this allows you to hit the same button again and again, with extreme rapidity. Naturally, it's not hard to see how this could be beneficial for esports.

In terms of everyday use, there's still some benefit, although Silver keys are not nearly as comfortable for the everyday typist as Reds, Browns or Blues. Using TypingTest.com, I scored 126 words per minute with six errors on the Alloy FPS RGB, compared with 115 wpm with 10 errors on a laptop membrane keyboard.

The Alloy's Silver keys are not nearly as comfortable for the everyday typist as Reds, Browns or Blues.

I spoke with HyperX representatives about the Alloy FPS RGB, and they informed me that the Silver key switches aren't really there to help you out with every single keystroke in every single game. In most cases, they won't perform that differently from key switches with longer actuations.

But suppose you're hitting a button 100 times per match, and one time, the speed of that keystroke could have made a difference in your performance. Multiply that by 10 matches per day (if you're a competitive gamer), and it's very possible that a faster key switch could be beneficial.

(This isn't a perfect argument, as I'd wager that player error is much more common than insufficiently fast keystrokes. But over the course of thousands of keystrokes and thousands of games, speed could eventually come into play.)

Like other HyperX gear, the Alloy FPS RGB runs on the suboptimal HyperX NGenuity software. The software works all right once you get it up and running — I've seen much worse packages — but I've never been able to just open it and have it recognize a gadget without a big song and dance.

After getting the program up and running again (following another false start), I was able to update it (with a screen that read "updateing"), which required a full restart of the computer. After that, it told me that this whole process had been for nothing, since I still had to download a new version of the software from the website. I did so, at which point the program installed a firmware update for the keyboard and shut itself down again. NGenuity makes users jump through a number of hoops.

Once that's all done, the software still has a few pain points. The "customize" and "edit" options do completely different things. The list of video games with built-in profiles is haphazard and updated inconsistently.

And although the lighting profiles for these games are attractive, they're pretty tame compared with some of HyperX's competitors.

Consider, for example, the Overwatch profile. On the Alloy FPS RGB, it's a neat, static lighting design with a lot of white keys, and some blue, green and pink keys to highlight the ones you need to play. It's pretty, but it's not really on the same level as Razer's Overwatch lighting profiles, which change dynamically depending on your characters, health and special abilities.

But lighting foibles aside, the illumination is pretty, and there a few attractive designs to choose from. Beyond that, you can link games with profiles and keep three onboard profiles at your disposal in case you travel. You can also reprogram keys and create macros, which could come in handy (if you play in settings that allow things like that).

When it comes to in-game performance, the Alloy FPS RGB is beyond reproach. I put the keyboard through its paces with Overwatch and StarCraft: Remastered, two games that have significant presences in the competitive scene, and I was extremely pleased with how the peripheral handled both titles.

In Overwatch, I could glide around the battlefield as Reaper, unloading my dual shotguns into unsuspecting opponents, while camouflaging and teleporting myself with the press of a button. No matter how many times I jammed on the keyboard, the keys sprung right back and processed my commands accurately. Likewise, in StarCraft: Remastered, the Alloy FPS RGB made it easy to construct buildings, marshal my forces and spawn new units without having to meddle with my mouse.

No matter how many times I jammed on the keyboard, the keys sprung right back and processed my commands accurately.

While the keyboard's performance isn't as imperative in single-player and MMO titles, it did just fine in Baldur's Gate: Enhanced Edition and World of Warcraft, too.

In all fairness, while the Alloy FPS RGB did extremely well, I don't play at nearly high enough a level to vouch for whether it handles competitive games any better than, say, the HyperX Alloy Elite RGB or the Corsair K70 RGB Mk.2. The Kailh Silvers work fine, but it would be hard to measure a quantitative performance difference between them and similar switches.

For all of my nitpicks, the Alloy FPS RGB works very well, and it costs a lot less than you might expect for a full-size RGB mechanical keyboard. I'm not thrilled with the Kailh Silver switches, the software still needs some work and the physical design eschews some of my favorite gaming-keyboard features.