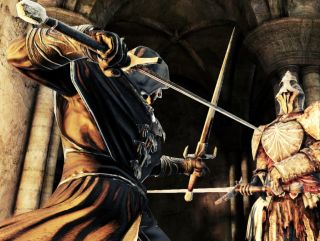 Check out the Tom's Guide coverage of Bloodborne, the successor to Dark Souls II, as well. We've published a primer as well as a full review.

Mention "Dark Souls" to a hardcore gamer, and you'll get a response somewhere between elation and abject terror. With the recent release of "Dark Souls II," this is the perfect time to jump into the series — provided that you're prepared to die, again and again. And again.

The "Souls" games are ultra-difficult hybrids of action and role-playing games (RPG) that punish players for rushing in headfirst, but reward them for careful exploration and measured combat. Despite its title, "Dark Souls II" is actually the third game in the series. Master one of the games, and you'll be prepared for all of them.

A history of suffering

The "Souls" series began in 2009 with the release of the tongue-twisting "Demon's Souls" for the PlayStation 3. The game, developed by From Software, was a spiritual successor to From's earlier efforts in the "King's Field" series.

"King's Field" was a brutally difficult action/RPG franchise that delighted some critics and frustrated others. The series had some good ideas, but low production values ultimately marred the games. "Demon's Souls" was essentially what "King's Field" could have been had it possessed a sizable budget.

By 2009, gaming had become a much more accessible hobby than ever before, and From had considerable difficulty securing funds for a game that prided itself on killing players for even a momentary lapse in attention. Still, Japanese publisher Atlus took a chance on the game and brought it exclusively to the PS3.

The gaming world's reaction was staggering. In Japan, Europe and the United States, "Demon's Souls" sold more than half a million copies. That's not exactly a "Call of Duty" number, but for a niche title from a relatively unknown developer with no mass marketing, the sales — not to mention the critical praise — were almost unheard of.

Although publisher contracts prevented "Demon's Souls" from spawning a direct sequel, From Software took its next game to Namco Bandai. This allowed the title, called "Dark Souls," to appear on both the Xbox 360 and the PS3.

"Dark Souls" was as much of a critical hit as its predecessor. But it sold millions more copies due to its multiplatform availability and a very vocal population of fans who, at every opportunity, touted the game in forums and Let's Plays (narrated online playthroughs on YouTube and similar sites).

From there, a sequel was a no-brainer. Namco Bandai published "Dark Souls II," which is now available for the Xbox 360 and PS3. If you've never played the series before, though, you need to know a few things before diving in.

Next Page Gameplay tips
No comments yet Comment from the forums