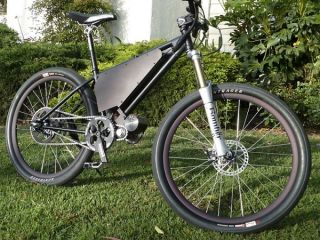 Designer Roy Prince has created quite an impressive electric bicycle. The eCortina v2 hybrid combines the best of traditional electric bicycle features: an electric motor that is capable of powering a bike by itself, and electric motor augmented pedaling. Utilizing a dual drive system, the versatile eCortina hybrid allows the rider to pedal by himself, not pedal at all or pedal with the assistance of the motor.

Beginning its life as a standard Cortina Triton DS mountain bike, the bike was upgraded by adding an additional motor, radio controllers and two packs of lithium-polymer batteries. The performance and range statistics are still being worked out but Prince estimates that the bicycle should be capable of traveling 15 miles on a single charge, assuming there are mild riding conditions and some pedaling involved.