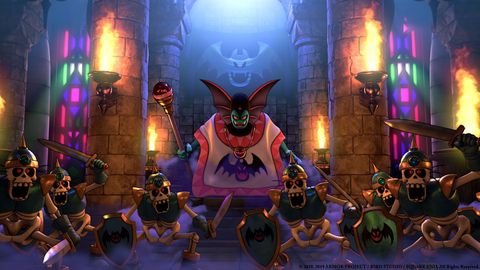 Dragon Quest Builders 2 is a block-building good time, which offers a fun story and lots of creative freedom to make the world you want.

Amazon
*Free* trial
$29.99
View
We check over 130 million products every day for the best prices

The Dragon Quest Builders franchise has always been a fun, colorful adventure that cleverly fuses both action and a Minecraft-esque style of base building. Akira Toriyama of Dragon Ball fame, is back with his gorgeous character design, filling the world with endearing heroes and monsters.

As an apprentice builder, you’re one of a handful of people in the world who can build and create things. Builders are crucial to the advancement of society. The world you live in is under the oppressive rule of the Children of Hargon, an evil group of monsters that has been kidnapping builders. Their sole purpose is to destroy everything they come across. You start off as a captive, running errands aboard a Hargon ship, before getting marooned on a barren island. Here, you and a gang of castaways try to create a kingdom — oh, and also try to save the world from the Lord of Destruction. No pressure.

The story does a good job of blending plot quests and free-building. This gives you enough creative freedom while still checking off every box you need to move the story along. Speaking of which: The writing is charming, and has the vibe of a Saturday morning cartoon. Builders 2 is teeming with personality and flavor, even though most of its story beats are super predictable.

Progressing through the narrative unlocks new recipes and blueprints, while making sure you complete all side-quests and puzzles is important for attaining the best equipment and items. When it feels like you're stuck, simply complete other missions and you’ll conveniently unlock the recipes you need to continue in the main story. Crafting is improved compared to the first game, with clearer instructions on how to get the materials you need.

The Isle of Awakening acts as your home base and your central hub for your adventures. This massive island offers you plenty of space to build to your heart's content within specific biomes. From here, you’ll visit other unique islands where your specific skill set will help people in need.

It takes a village

Each island focuses on different aspects of building, and each time, you’ll bring skills back to the Isle. These include crucial things such as defense, farming and, of course, building a bar. You know: all the things a good town needs. Speaking of good towns, the villagers actually lend a hand in maintaining the day-to-day operations of your town, assuming you give them everything they need. You can drop seeds, food, other building materials into communal chests, whereupon villagers will tend the farms, cook food, and build structures — assuming you have the blueprints.

On the Isle, you’ll have an ever-growing list of residents, whom you can assign to different parts of your island. The currency is Builders 2 is happiness. Every time you build a fancy new room or give your villagers something they need, like a restaurant or a hotel, they will leave you some hearts, which you can use to unlock more recipes. On the islands you visit during the story, hearts will upgrade the town you’re trying to rebuild by expanding the property line. This supports more structures and brings more people to town.

One issue I kept running into, however, was whenever I took on a quest to build certain rooms, I never really had a sense of where a town's property line was. Too often, I found myself building something just out of range, then having to demolish and rebuild in the middle of town, ruining whatever aesthetic I was going for.

You won’t just be fixing roofs and restoring infrastructure, though. You’ll explore deep into dungeons, fight monsters and solve puzzles. Since you can break down the entire world to component parts, you’ll find creative — and often unnecessarily complicated — ways to solve problems. I bypassed most platforming challenges by simply building staircases and bridges. Another favorite move of mine was just to punch holes through walls with a Builder Hammer.

The combat is simplistic, and you can resolve most encounters by just rope-a-doping monsters, then jumping backwards whenever they use a special attack. Monsters can't just let your people live in peace, and your towns will occasionally get overrun by destructive hordes. Combat feels a bit repetitive, since most opponents feel like damage sponges. Fighting sometimes feels like nothing but circling opponents and swiping away until they die. Boss battles add an element of strategy by introducing unique mechanics for each boss. For example: Early on, you fight a giant ape by making him slip on garbage, then beat him up.

The game also has small survival elements, such as managing hunger. If you’re hungry, you can’t sprint. Your Builder will also get too tired to swing their weapon, which is the most severe punishment Dragon Quest Builders 2. Death results in respawning back in town, or at the beginning of a Boss fight.

If you Build it, they will come

One awesome feature in Builders 2 is the ability to visit other players' islands and check out their creations. It’s one thing to admire someone’s palatial mansion; it’s another to build it yourself. When you visit someone’s audacious building, you can actually copy the blueprint, then bring it back to your isle and build it yourself, provided you have the materials and patience. Up to four players can get in on the block-building action and they can work together to make some pretty wild structures. You can even set rules to incoming visitors to prevent trolling, and ban players who seek to ruin your vision of building a giant, habitable pumpkin. The co-op is a fun distraction, but I preferred the more focused main campaign.

Dragon Quest Builders 2 can easily eat up hundreds of hours when you dive deep with your friends, trying to construct the most outlandish creations you can imagine. The campaign should take you about 25-30 hours. I’d recommend you complete it before even going online, as some of the story-related recipes are especially useful for any budding Builder.

Dragon Quest Builders 2 is a creative sandbox for players looking for a big adventure with quirky characters and the freedom to do what they love. (As long as what you love is building big happy faces made of gold.) If you loved the first Dragon Quest Builders game, the quality-of-life changes this time around make purchasing the second one a no-brainer.