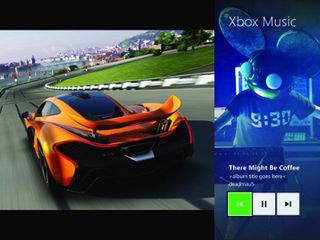 While the Xbox One has taken a beating in pre-release chatter and commentary, our sneak peek at the final interface shows that Microsoft does have a coherent vision for how gaming, video and communication can merge together seamlessly.

Yesterday (Nov. 7), Microsoft showed Tom's Guide what the experience of using an Xbox One will be like when the system launches on Nov. 22. From the dashboard interface to the television guide to the apps, Microsoft let us delve into how Xbox One could be the center of your media world.

To appreciate what the Xbox One offers, it's useful to first consider what the Xbox 360 doesn't offer. Playing a game on the Xbox 360 is great, but it's a closed experience. Say I'm flying around a track in driving title "Forza 4" and get an alert that someone on my friendlist has come online or sent me a message. Then what? I manually pause the game and press the shiny metal button in the center of the controller to open a small pop-up menu to read messages. To get to the main dashboard of apps and choose one such as Netflix, I first have to quit the game.

And now? While racing in "Forza 5," I press the guide button to enter the dashboard. My game is suspended, waiting there in the main tile (a kind of window) for me to return. The last four apps I've used are visible on that Home screen, as well as some Featured tiles, showing what's new to Xbox Live. I can use the controller to shift to the right to the neighboring Store screen and buy something from one of the four categories there: Games, Movies & TV, Music and Apps.

Or I may shift to the left screen, the Pins page, which displays 15 things I have saved there: games, apps or even specific things from those apps I have favorited, like an album from the music app, a show from a video app or a website from Internet Explorer. I can do any of these things, and my racecar cockpit is just waiting for me in the center of the dashboard. Whenever I want, I go back to it and can be racing again nearly instantly.

With Kinect, just say the word(s)

The Xbox One's ability to run both a game OS and a Windows OS simultaneously makes that seamless experience possible. But it is the Kinect's speech recognition that makes shifting among all these activities effortless. Who needs a controller to move through a menu? With the words "Xbox Go Home," my driving is paused and I am on the Home screen. Saying "Xbox Select" shows commands to speak for all of the options on the screen. With "Xbox Daft Punk," I can resume the music I was listening to earlier. Saying "Xbox Forza 5" stops the album and returns me to my racing.

MORE: How the Xbox One Game Lineup Stacks Up

The next words really show the all-in-one capabilities of this new console: "Xbox Watch National Geographic Channel." After I say this, my game is suspended, and I am suddenly watching television, directly jumping to the channel I had named. By plugging my cable box directly into the console via HDMI, I can now jump from channel to channel simply by saying the name of the network — no need to memorize the channel numbers. If I grow tired of the giraffes, I say "Forza," and I am back on the track.

Saying "Xbox Show Guide" brings me to OneGuide, which is not unlike the grid found on your typical cable channel guide, though I can navigate through it by voice. I can jump to channels I have marked as my favorites to see only those. I can also check the OneGuide grid to see what's on Netflix, Hulu+ or other apps. There's no separation between "cable" and "online" TV.

Xbox 360 has many entertainment partners that will likely continue with Xbox One, and Microsoft has just named a few that will become available between the launch and Spring 2014: Netflix, Hulu Plus, Amazon Instant Video, Crackle, CWTV, ESPN, FOX NOW, FXNOW, HBO GO, Machinima, MUZU TV, Redbox Instant, Target Ticket, TED, The NFL on Xbox One, Twitch, Univision Deportes, Verizon FiOS TV and VUDU.

In addition, you can use Skype to do video calls, with the Kinect camera automatically tracking the people in the room — zooming in and moving to keep them in the center of the frame, while continuously adjusting the camera based on the brightness of the room. Integration with Microsoft's cloud-storage system SkyDrive allows you to save video and pictures to the cloud, to share with friends or to be added as an option on your Pin page or even as a channel in the OneGuide.

Enriching that instant flow between apps via voice commands, you can "snap" apps to a sidebar on the TV screen. Once again, I am lapping my rival in "Forza," and I simply say, "Snap Internet Explorer" to start surfing via voice while I race. Or I say, "Snap Television," and I can glance at a football game while I complete lap after lap, the video game not slowing in the least. Perhaps I snap Skype to talk to someone while I play or snap some music. The Xbox One OS allows any app to be snapped while you play a game, or even to run two apps at the same time.

The whole experience is customizable by user: the design themes of the menus, the favorites on the Pin page and the favorites in the OneGuide. Xbox One knows who I am from my face and instantly loads up my settings. Someone else walks in front of the TV, and their profile is loaded up, too, an icon in the upper left corner that is just waiting. I could hand my wife the controller, and it switches to her profile, with everything set they way she has customized it. Or we can switch by voice, rather than passing the controller. The Kinect can track up to six people at once.

And so, I have seen an Xbox One-focused future. I can flow from one thing to another nearly instantly, even multitasking when I want. I go from game to TV to music to Skype to photo albums effortlessly. Or I browse the Web while I watch TV, listen to music while I browse my Netflix queue, or play a racing game while I video chat with a friend.

And I can jump between it all at any time, or even put the console in Standby mode and have everything saved exactly where it is so I can resume a race in the middle hours later. It is kind of empowering, being in control of it all with just a flick of the wrist or a god-like command.