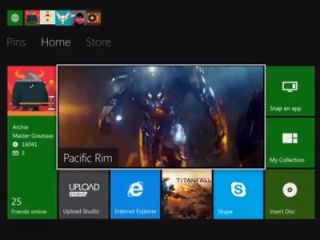 Microsoft has provided a glimpse in a new video showing how using the new Xbox One console will work. The video shows why the computing giant went with the numerically confusing name to emphasis the console’s all-in-one-device nature.

In the video, we see a user named "Archie Earnest" go through the new Xbox’s colorful dashboard and initiate a series of actions: watch the film Pacific Rim, instantly jump into an online multiplayer game of the upcoming "Titanfall," start watching Sleepy Hollow on television, and then take a video call via Skype from a friend.

All of this switching is done via Xbox One’s use of voice control, through the improved version of the Kinect sensor system that is bundled with the console. Another feature that Archie utilizes in the video is to record his "Titanfall" gameplay and then share the video online, presumably through the company’s partner Twitch. And while watching TV, he “snaps” Internet Explorer onto the screen as a sidebar so he can begin a web search.

Microsoft has undoubtedly provided this glimpse of the system firing on all cylinders, called "Meet Xbox One, to show just what players and their families can do with the multitasking and entertainment features of the Xbox One. These features, enriched by Kinect’s voice and motion controls, are Microsoft’s ammo against rival Sony and it’s upcoming PlayStation 4 console; the PS4 will launch one week before Xbox One in the U.S.

Xbox One will be released in the U.S. as well as in Australia, Austria, Brazil, Canada, France, Germany, Ireland, Italy, Mexico, New Zealand, Spain and the UK, on November 22nd.