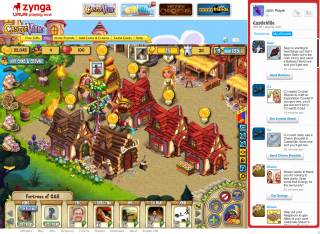 FarmVille and CityVille junkies rejoice, as you'll have an even bigger virtual landscape to grow crops on thanks to the Zynga Platform, or what the company calls "a playground for social games." As part of the initial roll out, Zynga will debut the beta release of the new platform on Zynga.com. It will serve up not only several popular Zynga titles, but social games created by third party developers like Mob Science, Row Sham Bow and Sava Transmedia.

"We built Zynga.com to give our players more ways to connect with each other and play great social games whether built by Zynga or other talented developers," said Mark Pincus, founder and CEO, Zynga. "Together with our platform partners, we look forward to bringing more play to the world on our platform."

The first set of Zynga titles to be offered on the new platform include CastleVille, Words With Friends, CityVille, Hidden Chronicles and Zynga Poker. The platform itself will consist of social features like zFriends which allows gamers to play with more people outside the Facebook social bubble. There's also Social Stream for posting requests in real-time, and Live Chat for real-time chattery without having to leave the game "board."

"Zynga.com was created based on listening to players and understanding what they want and need to make their play time more fun and meaningful," said Manuel Bronstein, general manager of Zynga.com. "We are excited to give players a way to connect with other people who love to play the same games in a destination that is all and only about games. We will continue to listen to player feedback and provide even better ways for them to connect and play together."

Not to worry: Zynga isn't abandoning long-time comrade Facebook. Instead, the new platform sounds more like a Facebook recruiting tool, connecting social gamers to the website who otherwise may have shied away. As Zynga states, the platform is one of the first sites to be "totally integrated with Facebook" as an extension of the companies' "strong and collaborative" partnership. Players will be able to log in with their Facebook ID and easily play games with their existing Facebook friends, as well as other people who love to play the same games.

When launched later this month, the full-blown Zynga Platform will be available in 16 languages, including English, French, Italian, German, Spanish, Portuguese, Turkish, Indonesian, Norwegian, Danish, Dutch, Swedish, Traditional Chinese, Korean, Japanese and Thai. Then later this year Zynga plans to open the platform up to more third party game developers (other than the current limited few) by releasing an API.