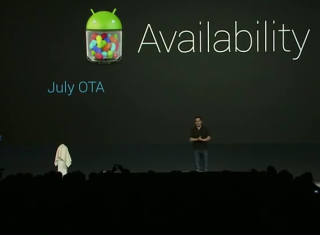 Aside from the Asus Nexus 7 tablet and the Nexus Q media streamer, another big piece of news to come from Google I/O today is Android 4.1 Jelly Bean.

As the version number suggests, it won't be a huge overhaul of Android, but rather some evolutionary and fairly significant upgrades. It will be headed to the Galaxy Nexus, Nexus S and the Xoom starting mid-July.

The first is what Google calls Project Butter, which is its effort to further smoothen the UI experience. Android will now ramp up the CPU speed as soon as the user touches the screen, devoting maximum resources to responsiveness. Triple buffering the UI also makes things a lot smoother. Android 4.1 will also predict what the user will touch next, helping to keep the OS one step ahead. Google showed a video from a 300 fps RED camera comparing speed and smoothness on a Galaxy Nexus between Ice Cream Sandwich and Jelly Bean, and hands down Jelly Bean was much slicker.

The home screen will be easier to manage. Widgets and shortcut icons will now resize automatically or give way to each other. If you've moved icons around on iOS, it's a bit like that where items on the home screen will shuffle around to make room for each other. Google just takes it to the next level with widgets.

Ice Cream Sandwich on the Galaxy Nexus demonstrated "zero shutter lag" on the camera. While the photos weren't necessarily best in class, the instantaneous nature was fairly impressive. Now Google is improving the camera app further, but by making image review much faster. Now users will only need to swipe on the screen to review the past images (rather than hitting the Gallery), and those unwanted can just be "tossed away" a la webOS.

The predictive text is even better now with words appearing atop the keyboard that try to guess what your next word will be. Some third party keyboards had this, and now it's baked in. The massive new improvement is that voice typing now works offline. This is monumental for those who have tried to dictate something, only to be foiled by a slow or flakey internet connection. Google demonstrated this by carrying out voice dictation while the phone was in Airplane Mode.

Android will be more accessible than ever, with new and improved support for Arabic, Hebrew, Persian, Hindi, Thai, and more for a total of 18 new input languages. Going even further, visual impaired users will be able to navigate Android using gestures and audio cues. There will even be Braille device input support.

Android Beam, the NFC technology, is expanded to support the sharing of photos between paired devices. Android Beam can also more easily pair devices as well, requiring just a tap between compatible hardware.

Android was a pioneer in the smartphone notification space, and now it's improving it in 4.1 with actionable notifications in the swipe down menu. Now missed calls can be directly dialed back, and social network updates can be "liked" directly from notifications. The Gmail notification will give a short snippet of each new email, so you can tell at a glance what's worth reading right away. These notifications can also be expanded and collapsed with a two-finger gesture.

Android being from Google, search technology is at the core. Jelly Bean will bring with it search result cards, where the most relevant result will be displayed in a simple, large format. Of course, with Apple's Siri nearing a year on the market, and Samsung having its own S-Voice, Google isn't sitting this one out. Google's voice search is easily the most natural sounding of all, though it still remains to be seen if it'll be the best at voice recognition and finding the relevant result. On the stage, Google demonstrated several general questions. The voice that read the result back to the user was startlingly natural and realistic – on a whole other level above Siri. The information will be displayed on the screen on a card, with the full Google search results underneath. The voice feature doesn't seem to be able to control other aspects of your phone like Apple's Siri can – such as setting your alarm clock or sending texts, but perhaps that's the next step.

The final major new piece to Jelly Bean is Google Now, which takes your search and navigation history, along with your current location and upcoming calendar events to create a personalized listing for you. It can tell you when you need to leave for your next appointment, whether you're traveling by car or public transport. It will also notify you if your flight is delayed and will take that into account for what's scheduled in your calendar. Google Now will also automatically display sports scores of your favorite team as well as give you some suggestions of nearby restaurants.