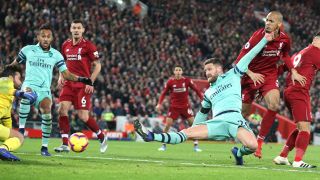 The Premier League's top two teams clash at Anfield this week as Liverpool takes on Arsenal. Whichever team wins this clash will get a serious lift in the title race. Here is how to live stream the Liverpool vs Arsenal match to see who comes out on top.

The only two clubs to secure all six points in their first two fixtures, Liverpool and Arsenal will hope to continue their strong run of form. A win against a top club like Arsenal would be huge for the Reds, who narrowly finished in second place in the Premier League last season. Similarly, Arsenal will want to prove themselves against last year's Champions League winners after falling flat last campaign.

When is the Liverpool vs Arsenal Premier League Match?

How can I live stream Liverpool vs Arsenal in the U.S.?

Liverpool vs Arsenal will air on NBC Sports (NBCSN) on all major cable providers, including Dish, AT&T U-Verse, Verizon Fios, Spectrum and Cox.

NBC Sports is included in the price of your cable subscription, so you don't have to pay extra for a sports package.

Away from your TV? You can live stream the match on the NBC Sports app, which is available on most major platforms, including iOS, Android, Windows 10, Roku, Amazon Fire, Chromecast, Xbox and Samsung TVs.

NBC Sports Gold, NBC's subscription-based streaming service, will not show the Liverpool vs Arsenal game so the only way to live stream the match is by logging into the NBC Sports app using your cable subscription credentials.

Cord cutters subscribed to an over-the-top TV service can use their Sling TV, PlayStation Vue, FuboTV, YouTube TV or DirecTV Now logins to live stream the match on the NBC Sports app.

The Liverpool vs Arsenal match will also be broadcast in Spanish on Telemundo Deportes, NBC's Spanish-language network.

How can I watch Liverpool vs Arsenal in the U.K.?

Liverpool against Arsenal will air live on Sky Sports Main Event and Sky Sports Premier League channels to Sky customers with a premium package or those who pay for a Sky Sports package on another cable service, like Virgin Media or NOW.

You can watch the game on your smartphone or laptop through the Sky Sports website or free mobile app available on Android and iOS.

How do I use a VPN to live stream Liverpool vs Arsenal?

If you’re traveling outside the country, but don’t want to miss the match, a virtual private network, or VPN, could be an ideal choice. Actually choosing a service could be a challenge, but fortunately, we’ve tested out many different offerings to find out who offers the best VPN. Our top pick is ExpressVPN, which offers superb speeds that will meet the needs of most users, but you’ve got other options as well.

Cheap and secure, NordVPN is just $2.99/month for a three-year contract, while a month of service costs $11.95. NordVPN uses 2048-bit encryption, and makes it easy to use streaming services.View Deal

Performance is just average, but this is one of the simpler VPNs out there, and at $9.99 for one month of service, TunnelBear is a lower-cost option.View Deal