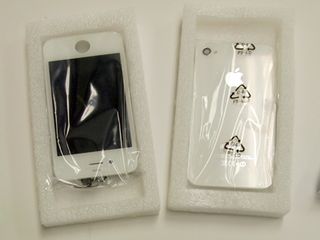 When word hit the Internet a few weeks back that white iPhone 4 conversion kits were for sale by a New York teen who may or may not have some connections to Apple’s manufacturing plant in China, we were intrigued. After all, a certain editor was mighty upset at the lack of white iPhone 4 units, and was very interested in the possibilities for do-it-yourself options

Well, a lot can happen in the time it takes to place an order for an iPhone 4 conversion kit, and for it to arrive from Shenzhen. For starters, Fei Lam, the Queens, New York teen who sold the kits, abruptly took down his site just days ago with no explanation. He could not be reached for comment. Apple's legal department had been giving him the evil eye almost as soon as stories of his little side business hit the Internet, after all.

Next, word came from on high (i.e. Apple) that the white iPhone will finally arrive in Spring 2011.

Combine this upcoming availability with the lack of clear instructions on how to do it (when Lam’s site went down, so did his collection of thorough instructional PDFs), and the fact that the conversion is such a daunting and risky conversion (would YOU sacrifice your $599 phone in such a risky maneuver?) that we felt in the end, it was not worth the effort.

We don’t want you to think the Tom’s family shrinks from a challenge easily. This is a site born in the world of overclockers, after all. But there's also something to be said for knowing your limits and weighing risk vs. reward. That's the warning Tom’s Hardware gives to everyone new to system modification, after all.

Was it worth it to risk a functioning iPhone 4, which would cost three times as much to replace as it did to purchase, when the supplier had vanished and legitimate supply was on its way? In the end, we thought not.

Here are images of the kit we received from Lam, as well as the receipt, which shows that the components shipped directly from Shenzhen, China. What would you do with this kit? We wish a hearty "cheers" to any journalist willing to put his own phone under the knife for the sake of his audience.