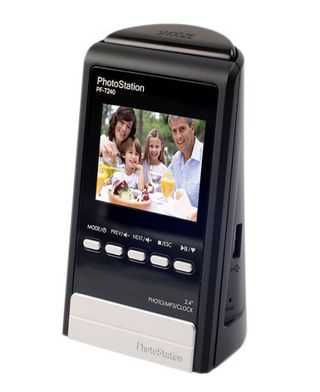 An assortment of companies are introducing a diversified collection of new digital picture frames at the PMA 08 photography convention in Las Vegas. Why all the interest in what some may think of as a novelty product? Irvine, California vendor Mustek Inc cites market research that may provide an answer: Worldwide shipments of digital photo frames are expected to grow from 2.8 million units in 2006 to more than 12 million units by 2010.

Earlier this month, Mustek debuted 7 new photo frames, with higher resolution LCD screens and added features. However, Mustek is going smaller for PMA 08, featuring the PhotoStation, a multifunction digital photo frame with a 2.4" LCD display. In addition to being a digital frame, the PhotoStation functions as an alarm clock, and includes a built in MP3 Player, FM Radio, and thermometer. The PhotoStation has an MSRP of $79.99.

Dublin, California’s Pandigital also has a new twist on digital picture frames. Their frames are Wi-Fi and Bluetooth enabled, so that customers can send photos from their computers or Bluetooth devices directly to the their frames. Some frames can hold as many as 3000 images, while calendar and clock functions enable programming the content to display at preset dates and times. The frames range in sizes from 1.8" to 15", and the MSRPs range from $39.99 to $299.99.

Other vendor’s with digital picture frames on display at PMA 08 include:

With these interesting new releases, I believe it’s safe to say that digital picture frames have successfully moved from “novelty item” to “impressive new product” status.