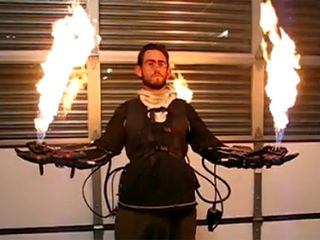 Man's fascination with fire transcends all boundaries. It's no surprise, considering that fire has the power to both create and destroy, all while looking wickedly awesome. Well, when it comes to playing with fire, the guys over at J&M Special Effects are trying to one-up everyone else. How? By building a rig that lets them shoot fire out of their hands.

Appropriately named the Flame Glove System, it's basically a traditional tank-in-the-back flamethrower setup with one significant change: it releases blasts of flame via palm-mounted nozzles. It's only in the prototype stage, but J&M plan to streamline it further so that all those messy cables are tucked out of sight.