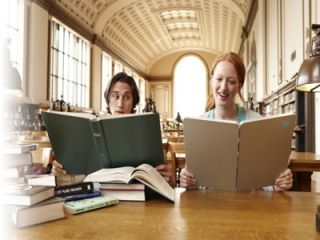 The Kno is not your usual ereader. Targeted at students, the Kno is supposed to for viewing textbooks. Though it's probably a lot less cumbersome than an armful of those heavy textbooks our backs haven't quite forgotten, at 5.5 pounds, the Kno is a little unwieldy too. Still, a dual-screen 14-inch full touch ereader is nothing to turn your nose up at, and when you throw in Nvdia's Tegra 2 chipset, 16GB of storage, and up to eight hours of battery, you've definitely got our attention. Even if it does look like this when we're using it:

Kno last night announced pricing and availability for its flagship device and it looks as though the company is making good on two promises it made when the Kno was unveiled. This past summer Kno reps said the device would be priced at "under $1,000" and that it hoped to ship the device by the end of 2010. Some of you thought that the former would mean a $999 price tag, but that's not the case. Kno has revealed that the pricing for the dual-display model, as seen above, is $899. A slightly more compact model with just one 14-inch display will cost $599. Kno says it will have a limited number of the devices available for sale by the end of the year.

So the single screen device is two hundred bucks cheaper, but still costs the same amount as a budget laptop. Would anyone ever buy it? Kno says their research shows that students love the fact that they can write in a textbook. However, the company also found that the more expensive, dual-screen model was more sought after.

"We found that 85 percent of those using the single screen wanted the dual-screen version and that those using two screens took three times more notes," said Co-founder and CEO Osman Rashid. "Students said they love the fact that they can write in the textbook itself and it appears the way it needs to be, even in digital form."

Rashid has said his company will be targeting 10 colleges in the U.S. for the first shipment and doing some very specialized marketing.

"We are going to do online and offline marketing, in a very focused approach," he said, adding they would be working with some college bookstores too.

Would you buy one? Let us know in the comments below!