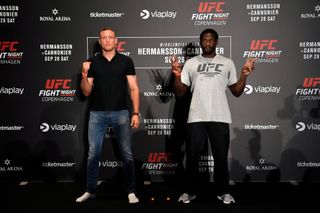 If you’re an ultimate fighting fan, you know that not every fight not promises to be a spectacular one. But this year, the UFC has been able to put on some fun and exciting bouts. And today ( Sept. 28), the company promises to do it again with UFC Fight Night 160.

This time around, UFC Fight Night will be available via ESPN+, which will somewhat limit how and where you can watch the bouts. But if you’re like most fighting fans who want to see whether Jack Hermansson or Jared Cannoier will take the top spot, you’ll want to tune in.

Exactly how you tune in, when, and where might not be so simple, though. So, we’ve compiled the following roundup to help you watch UFC Fight Night 160 whether you’re in the U.S., abroad, or on just about any device of your choosing.

Where can I live stream UFC Fight Night 160?

The fights kick off from the Royal Arena in Denmark at 11 a.m. ET. From there, the main card will kick off at 2 p.m. ET on Saturday, September 28. But regardless of which group of fights you watch, you’ll need to tune in to the fights on ESPN+, a $50 per year service (plus tax) that makes it surprisingly easy to watch everything from big fights to other sports on the device of your choice. (The price for ESPN+ is $4.99 if you subscribe on a month-to-month basis.) Be aware, however, that ESPN+ costs extra beyond your cable or satellite subscription.

Here’s a breakdown on the UFC Fight Night 160 card.

How do I use a VPN to live stream UFC Fight Night 160?

If you're traveling outside the country during UFC Fight Night 160, you'll still be able to watch it. A virtual private network, or VPN, can help you connect to your desired streaming service through a U.S. server and watch the draft as if you were at home.

Here are three VPN options worth considering, should you need them during UFC Fight Night 160.

NordVPN: Cheap and secure, NordVPN is just $2.99/month for a three-year contract, and makes it easy to use streaming services. A connection wizard makes it a breeze to get started, and you can expect good security with 2048-bit encryption.View Deal

How can I live stream UFC Fight Night 160 without a cable or satellite subscription?

To effectively stream the fights and not miss a single moment, you’ll need to have an ESPN+ subscription. Luckily, at $50 per year (plus tax), it doesn’t cost nearly as much as you might think to access the service.

Once your subscription is active, you can get an ESPN+ app on everything from your iPhone and iPad to your favorite Android device on mobile. You can also stream ESPN+ on your set-top box of choice, including Apple TV, Roku, Amazon Fire TV, and more. Here’s a handy guide to all of the places ESPN+ is available.

How can I watch UFC Fight Night 160 with a cable or satellite subscription?

It’s pretty much the same story for anyone who already has a cable or satellite subscription, since the fights will be streaming on ESPN+. Like it or not, since ESPN won’t be airing the fights on its pay cable channels on Saturday; you’ll need to boot up ESPN+ and pay the subscription fee.