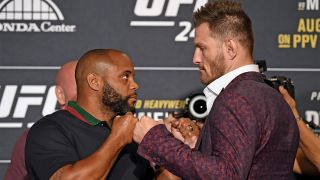 UFC 241 promises to be one of the biggest fighting events of the summer. The card features not one but two main events, with the first fight pitting heavyweights Daniel Cormier and Stipe Miocic against each other and the second featuring welterweights Anthony Pettis and Nate Diaz.

When the show kicks off from the Honda Center in Anaheim, Calif. on Saturday, August 17, it’ll also feature plenty of outstanding young fighters who are hoping to make a mark on a decidedly stacked card.

Needless to say, fight fans are likely itching to find a way to live stream UFC 241. But actually streaming the big event isn't as simple as you might think. The best way to watch the fights is to be a UFC Fight Pass subscriber. But if you’re not, there are still some solutions.

To watch UFC 241, you’ll need to bounce around between streaming services and television to see every fight on the card.

Starting at 6:30 p.m. ET on Saturday, August 17, you’ll need to start at UFC’s Fight Pass (which starts at $9.99 per month, with a 7-day free trial), so you can watch four “Early Prelims” fights. Next, you’ll need to turn the dial to ESPN, where you can watch the next four fights on the card. That coverage starts at 8 p.m. ET. When it’s finally time to watch the Main Card, you’ll be able to watch the final five fights at 10 p.m. ET. The Main Card will air on PPV, ESPN+, or UFC Fight Pass.

If you're traveling outside the country during UFC 241, you'll still be able to watch it. A virtual private network, or VPN, can help you connect to your desired streaming service through a U.S. server and watch the draft as if you were at home.

Here are three VPN options worth considering, should you need them during UFC 241.

How can I watch UFC 241 with a cable or satellite subscription?

If you want to watch UFC 241 on television, you won’t necessarily get the best experience.

As discussed, UFC’s Fight Pass streaming service will act as the anchor much of the programming. The first fights will only be available there, so you’ll need to be a subscriber to watch every fight. After that, you can turn to your cable or satellite subscription to watch ESPN for the second round of fights and then go to PPV on your local dial for the main card.

How can I live stream UFC 241 without a cable or satellite subscription?

Streaming UFC 241 is undoubtedly the best option if you want to watch every fight on the card.

To achieve that, you’ll need to tune in from UFC’s Fight Pass, which costs $10 per month to access the company’s live-streaming fights, as well as an archive of bouts from previous events. Like other popular streaming apps, you can watch it on nearly every device out there, including your smartphone, browser, tablet, smart TV, and set-top box.

Since the prelims are on ESPN, you’ll need to find a streaming service to actually watch the fights on the popular networks. Here’s a look at the services that work with ESPN:

Hulu + Live TV: Hulu's Live TV package will set you back $45 per month for 60 channels, including ESPN. Best of all, you can record up to 50 hours of programming to Hulu's cloud DVR.View Deal

Playstation Vue: With a $45-a-month PlayStation Vue subscription, you can stream ESPN through the service's Access tier, which is the higher-level package from PlayStation.View Deal

SlingTV: Sling doesn't include local channels, but that's not a concern if you're interested in UFC 239. Its Blue tier includes ESPN, which is all you'll need to watch the draft. A current promotion is knocking 40% off the normal $25 monthly rate, so you'd just pay $15 for SlingTV.View Deal

YouTube TV: The $50-a-month YouTube TV has more than 70 channels that make it easy to watch the programming you want, including ESPN. YouTube TV also features unlimited cloud DVR storage, so you can watch the tournament at a later date.View Deal

After the prelims are over, you’ll need to go back to UFC Fight Pass. You can also watch the event on ESPN’s paid streaming service, ESPN+, which costs $5 per month or $50 per year.

Like UFC Fight Pass, ESPN+ is available on several devices, including the iPhone and Android-based devices. You can also stream the app on Roku, Chromecast, Kindle Fire, Apple TV, and several other streaming devices.