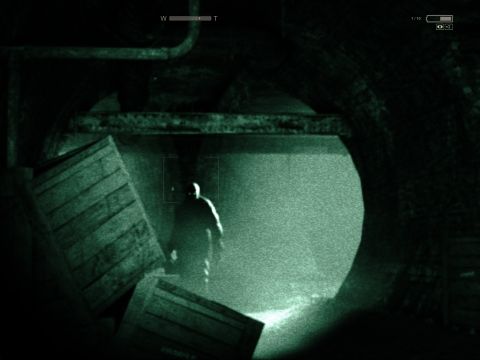 If you long for the days when horror games were about real fear rather than tossing grotesque enemies into action franchises, "Outlast" is just what the deranged psychiatrist ordered.

The room is dark and you can hear labored breathing. Whether it's your own or someone else's — someone more terrifying — is hard to say. You peek around the corner and see a dim light in the distance. Picking up your trusty camera, you flip on the night vision and bound forward, only to hear a slavering subhuman hot on your trail.

You can run, you can hide or you can die. In "Outlast," those are your only three options. This first-person survival/horror game comes by way of indie outfit Red Barrels Studios, and what it lacks in technical sophistication, it more than makes up for in jump scares, fearsome creatures and gut-wrenching gore.

Games like "Dead Space 3" and "Resident Evil 6" compromise their horror roots by embracing an over-the-top, Michael Bay-style approach to gameplay, but "Outlast" hews much closer to traditional survival/horror titles like "Alone in the Dark" and "Silent Hill."

"Outlast" provides a surprisingly comprehensive experience, given how limited your gameplay options are. You take control of Miles Upshur, an investigative reporter tasked with looking into the odd happenings at the Mount Massive Asylum.

As an everyman journalist, Miles has access to a working set of legs, an HD video camera and little else. You can walk, run, peek around corners, interact with simple objects and activate your camera's low-light mode to see in the dark. Those hoping for a way to defend themselves against the horrors that lurk in the night are out of luck.

The minimalist approach to game mechanics in "Outlast" is one of the game's greatest strengths, and makes the few actions you can perform feel meaningful. Sprinting down a corridor, slamming doors shut behind you, and hiding in a locker as a slavering brute smashes in doors and sniffs around right outside is enough to get even a jaded horror fan's heart racing.

The camera's night vision functions only when it has enough battery power. Combined with extremely dark, labyrinthine level design, hunting down precious batteries while trying to find your way out of a mazelike corridor — potentially with enemies in pursuit — can feel absolutely harrowing.

Although "Outlast" succeeds in inculcating a sense of terror and helplessness, the game is not very punishing, and this often works to its disadvantage. Miles can take a good two or three hits from most enemies, which means that pushing past them — and getting a good look in the process — is often a viable strategy. Like seeing the shark in "Jaws," the creatures lose a lot of menace when you can see them clearly.

Checkpoints are frequent, and if Miles dies, he's restored with full battery power. While "Outlast" never loses its sense of danger, redoing the same section two or three times with full night vision and a foreknowledge of enemy locations takes a lot away from the experience. After a while, each level's layout makes it fairly obvious whether you're about to solve a puzzle, flee from a foe, or both, which can sap some of the surprise when a freakish enemy emerges.

Without a multiplayer mode or any post-game bonuses, "Outlast" is a game you'll play only once, unless you're dedicated to hunting down every last story document.

On its surface, "Outlast" is about as old-school as horror plots come: You're trapped in a dark, scary place and you have to get out before the things that go bump in the night hunt you down. The story's pacing is excellent, and you'll be forcing open rusty gates, restarting generators in spooky basements and hanging from precarious ledges in thunderstorms before you know it.

What's not so straightforward is the game's deeper narrative, which examines how the insanity at Mount Massive Asylum began, and what Miles thinks of the whole situation. As you progress through the game, you'll collect medical records and jot down notes. If you want to stay focused on getting out in one piece, you can bypass the documents without any ill effect, but if you want to know more, there's a decently meaty plot underneath.

This method of storytelling has its disadvantages, though. Miles discovers documents and notes in spooky rooms, often with enemies in plain sight. Stopping to read them interrupts a scene's tension, but saving them for later means you'll often wind up with a three- or four-note exposition dump. If you miss a document, there is no way to retrieve it later on. The notes can also be a little wordy, and the medical records and police reports can be dry.