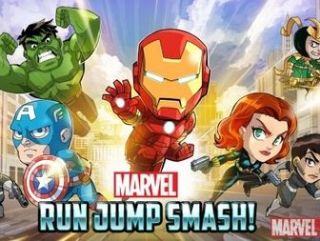 Marvel's famous superheroes have dominated the box office for the last few years, but that doesn't mean the entertainment company has been slacking off on the video games front. At New York Comic Con 2013, Marvel hosted a panel detailing its plans for an enormous host of mobile and casual games coming in the next few months.

The panel began with a quick announcement that "The Amazing Spider-Man," the well-received action game based on the 2011 movie of the same name, would make its way to Sony's PlayStation Vita on November 22. The game will be a direct port, so don't expect anything too new or exciting.

"Marvel Heroes," the free-to-play hack-and-slash massively multiplayer online game (MMO), was next up on the roster. This game lets players choose a hero, take on missions, level up their abilities and unlock new characters and costumes as they progress. The game has already been out for a few months, but a few new features are on their way.

MORE: 25 Superhero Wallpapers to Spruce Up Your Desktop

The first mode detailed was the X-Men-focused survival mode. This pits players against endless waves of enemies who are attacking the students at Professor Xavier's school in upstate New York. The developers joked that the mode is based on the unwinnable Kobayashi Maru in "Star Trek," as winning is impossible, and instead gauges how long players can survive.

"Marvel Heroes" will also add enhancements to the player-versus-player (PVP) system and a plethora of new playable heroes in the next few updates. Joining the cast are Luke Cage, Gambit, Emma Frost, the Human Torch and Squirrel Girl.

To coincide with the release of Marvel's movie "Thor: The Dark World," "Marvel Heroes" will also introduce an Asgardian expansion, letting players explore Thor's homeworld and interact with Loki, his mischievous (and unaccountably popular) brother.

Mac fans will also be pleased to know that the team is hard at work on a Mac client for the game, which will be available by Christmas.

For fans looking for something more unusual, "Marvel Run Jump Smash!" might fit the bill. This mobile side-scroller just launched in Korea, and promptly took the top spot at the Android app store. In this title, super-cute versions of Marvel superheroes must chase Loki through the streets of New York, collecting coins and destroying obstacles as they go.

More pensive mobile gamers may want to check out "Marvel Puzzle Quest: Dark Reign" instead. This title for Android and iOS is free-to-play and available now. "Marvel Puzzle Quest" combines the beloved lore of the Marvel Universe with the addictive puzzle/RPG hybrid "Puzzle Quest." Imagine playing "Bejeweled," but with a sweeping story and abilities that grow stronger over time.

Digital card game competitors can look forward to minor updates for mobile card battler "Marvel War of Heroes." They should also stay tuned for a new card game: "X-Men: Battle for the Atom," which will debut in December.

"Marvel Pinball," a pinball simulator with a number of Marvel accoutrements, is getting a Dr. Strange level, while the Facebook RPG "Avengers Alliance" will soon offer Domino, Sabertooth and Loki as playable characters.

"Thor: The Dark World" will get its own video game adaptation on mobile devices. The game will debut around the same time as the movie in November, and sports console-quality graphics for a 3D action game.

Marvel's big draw at the panel this year was "Lego Marvel Superheroes," which is slated for release on October 22 for current-gen consoles and sometime in November for the PlayStation 4 and Xbox One. The game lets you take control of Lego versions of everyone from Deadpool to the Thing, and from the Green Goblin to Doctor Doom, and use them to explore an open-world New York City.

The game boasts more than 100 playable characters, and Marvel took NYCC 2013 as an opportunity to reveal a whole slew of new ones. If you ever wanted to play as Electro, Ant-Man, Black Bolt, Shocker, Pyro, Nightmare, Absorbing Man, Malekith, Kurse, Taskmaster, Power Man, Iron Fist, Havok, Polaris, Moon Knight, She-Hulk, the Superior Spider-Man or even Spidey's elderly Aunt May, then you're in luck.

Finally, although Marvel could not reveal much information about it, it announced "Amazing Spider-Man 2," which is an open-world action sequel to the 2011 title. Expect more web-slinging and villainous boss fights, but also get ready to play as Peter Parker and accomplish as a photojournalist what might be difficult as a superhero.

Overall, Marvel has more to offer casual gamers than its hardcore fans in the coming months, but its presence in the video game market will likely only grow as its movie TV spin-offs gain popularity.