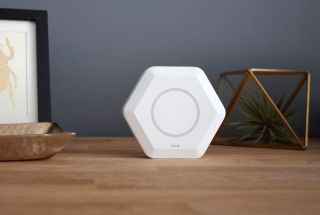 Have a lot of Wi-Fi dead spots in your home? Worried about what your kids are up to online? The Luma Wi-Fi router system promises to tackle both concerns.

The Luma system, launching in the spring of 2016, distributes three small, identical, hexagonal base stations throughout your home. One base station plugs into to your broadband modem, then connects wirelessly to the other two. All three transmit and receive Wi-Fi signals on the 2.4 and 5GHz bands, and support 802.11 a/b/g/n/ac as well as Bluetooth 4.0 LE.

The entire system is administered via an iOS or Android app, which has detailed, granular parental controls built in. You can monitor what every networked device is doing, and even see which Web pages your children (or other adults in the home) are connecting to. Each user's Internet usage can be curtailed, from limiting access times to restricting what kinds of websites the kids see.

This rather amusing video spells it out:

The Luma system also has some security features. It can monitor the network for traffic to and from known criminal command-and-control servers, and will alert the network admin if any device (including Internet of Things devices such as a Wi-Fi TV or refrigerator) still uses the factory-set default passwords, a common security mistake. However, as the Luma system doesn't peer into the machines, you'll still have to run antivirus software on your PCs and Macs.

Overall, the Luma is simply porting features commonly found in office networks to the home. But with many homes sporting a dozen or two Internet-connected devices, a little boosting, filtering and administration of domestic networks is overdue.

You can pre-order the Luma system today. One Luma router costs $99, and a pack of three goes for $249. Those prices will double once the devices hit the market next year.