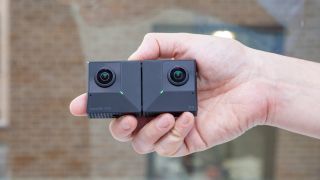 Despite the lower prices of headsets such as the Samsung Gear VR and the Oculus Go, virtual reality has yet to really take off. One of the reasons? There's not enough stuff to watch.

Cameras with 360-degree capability have helped, but there aren't many affordable stereoscopic cameras that can capture 3D video. Insta360's newest camera, the Evo ($419), can do both. In one mode, its dual cameras can record everything around you; in the other mode, the device's cameras can take stereoscopic video and photos for a truly immersive experience. But while its software and the images it takes are impressive, the Evo's hardware is a little too finicky for it to compete with the best 360 cameras out there.

Similar to the Vuze XR, the Evo folds in half to take 360-degree images and video. Each side of the squarish device measures 2 x 2 x 1 inches, and each is held together by a hinge; latches on the top and sides of each half keep them locked in place if you're using the Evo as a 360 or stereoscopic camera. The latches are a bit of a pain to use, though, so the transition between 360- and 180- modes isn't as seamless as I'd like.

When folded out, the top-right half of the Evo (if the camera is facing away from you) has a power button and a shutter button. In between are two tiny LEDs and two tiny icons for photo and video mode that are nearly impossible to see. The right side has a microSD card slot and a micro USB port for charging the camera.

On the bottom of the right side is a standard tripod screw mount; this is essential, since it's impractical to use the Evo without a selfie stick of some kind.

While the Vuze XR ($439) is larger, I much preferred that camera's design for several reasons. It has a built-in grip, making it easier for spontaneous photo shoots; the mechanism for switching between 180- and 360 modes is much simpler, and it's much easier to view its icons for video and photo mode.

The cameras in the Insta360 Evo and Vuze XR are very similar, specs-wise. Each can record 5.7K/30-fps video and take 18-MP still photos.

I took both cameras to the top of the new sculpture at the Hudson Yards in New York to see how they compared.

Indoor 360-degree photos from the Insta360 were pretty good; from the middle of Grand Central Terminal, the scene was evenly lit, though the sunlight coming from the windows was a bit blown out. You can also tell that the camera used a slower shutter speed, since people in motion are blurred.

However, on another day, with more light streaming through the windows, the Insta360 Evo didn't perform as well, as the image was a lot more washed out. I took a photo using the Vuze XR under the same lighting, and it was much more evenly lit.

The Insta360 and the Vuze performed equally well when I took them up to the top of Vessel, a new sculpture in Manhattan that looks like a giant copper beehive or shawarma meat spit, depending on your perspective. Except for one spot where the sun was shining directly at the camera, the entire scene was well exposed, from the bright blue sky to the dark bottom of Vessel. Even my face, which was in the shadows, was easy to see.

I also used an Oculus Go to check out the videos and photos I took on the Evo. On that device, stereoscopic images and videos really came to life. Water spitting from a fountain in Bryant Park appeared to jump out at me, while the walk through Grand Central made it feel almost as if I were there. Colors were fairly saturated, and there was plenty of detail; I could see actual droplets of water as they came out of the fountain.

One of the limitations of shooting stereoscopic photos and videos is that your field of view is limited to 180 degrees. So, if you're viewing these images using a VR headset, your range of motion will be limited.

But how do I watch my 3D footage?

You can watch footage from the Evo using the Samsung Gear VR or Oculus Go headsets, but Insta360 realizes that not everyone has a VR headset on hand. That's why the company's selling the HoloFrame smartphone case as an accessory. Basically a clear plastic case, the HoloFrame has a number of ridges (not unlike a Fresnel lens) that, when placed in front of your phone's screen, will let you view stereoscopic videos in 3D.

Using the HoloFrame is a little funky. First, you have to attach the case to your phone so that what would be the back of the case covers your phone's screen. (You can still use your phone's touch screen, but you have to press a bit harder.) Then, from within the Insta360 app, you have to enable the HoloFrame mode for whatever video you want to watch; you then have to configure HoloFrame mode for your eyes before you can watch the video. This also means that you can't simply hand the phone to a friend and expect that person to see things as well as you do.

MORE: Eye Tracking Is a Game Changer for VR, and I Just Tried It

The HoloFrame uses your phone's camera and eye-tracking technology to ensure the best possible quality, and when it was aligned properly, it was a neat effect. In a video I shot of the Grand Central Market, it looked like the food court was receding into the depths of my iPhone XS. However, I had to hold the phone right in front of my face; if the app didn't detect my eyes, it would stop. And because of the case, the video wasn't superclear. It was like looking at one of those hologram baseball cards. Plus, the case picks up fingerprints very easily.

The HoloFrame is available for iPhone models X, XS, XS Max and XR; cases for the Samsung Galaxy S8, S8+, S9 and S9+ and the Note 8 are coming soon.

In all of its cameras, one of Insta360's strengths has been its app, which adds a lot of features. Circular thumbnail images let you preview photos and videos stored either on the camera or your phone, and you can also view tutorials and photos and video taken by other Insta360 users.

You can trim videos, and once you download them to your phone, you can add filters; change the speed; add music, color temperature and contrast; and more. If you've recorded a 360-degree video, you can also shift the focus of the camera to specific points in the video, in case the action moves to your right or left — or even behind you.

While you can change the exposure, set a timer and change the white balance of photos, you can't adjust their resolution. This latter function is available only for videos.

The Vuze XR's app has many of the same features as the Evo, but one pretty major limitation: You can't view or download photos or videos recorded at 5.7K on your phone. Rather, you have to use Vuze's desktop app for this. That's a pain. The company said that it is working on a fix but did not give a time frame.

Insta360's desktop software lets you view and make minor edits to your photos and video. But if you want to adjust colors or contrast or anything like that, you'll need to export your content to a video or photo editor.

Insta360 also allows you to view footage in 360-degree formats, such as Crystal Ball and Tiny Planet. Vuze's desktop app shows images only in a flat rectangle, so you have to use another app to see the images as they should appear.

The Insta360 Evo fits a small niche: those who want to shoot 360-degree as well as stereoscopic photos and video. And it does that pretty well. However, the Evo is not as easy to use as the Vuze XR. For one thing, you need to attach a selfie stick to the Evo, while one is already built in to the Vuze. And switching between 180- and 360-degree modes was a lot easier with the Vuze, as was determining if I was in photo or video mode. While Insta360's app is a bit more fully-featured, the Vuze is a better overall package.