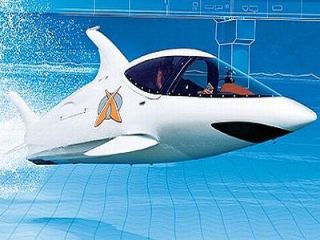 Sure you may have swam with the dolphins before, but have you ever imagined what it would be like to swim like a dolphin? With the Seabreacher X, users will be able to fulfill all of their dolphin swimming fantasies with the ability to dive underwater, ride along the surface and even lunge 18 feet into the air.

Powered by a 260 hp generating 1500cc engine, this 17 foot long watercraft is capable of reaching speeds of up to 50 mph. With a watertight cockpit that allows its user to take a short dip underwater, the Seabreacher is able to leap out of the water like a real dolphin. To steer and accelerate the vehicle, drivers utilize two separate foot pedals and a steering system to manipulate the Seabreacher's fins.

Complete with an iPod-compatible media system, GPS and LCD screen that transmits a live camera feed from the top of the dorsal fin, it doesn't come as too much of a surprise that this luxuriously fun-filled craft costs $81,000. Sure it costs as much as a sports car but can your Porsche do this?