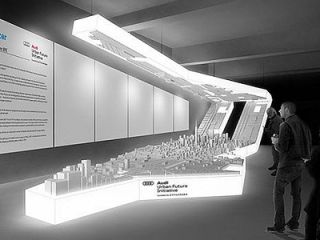 During an exhibition created by German automaker Audi, five of New York's leading young architectural firms revealed their vision of New York in 2030. With an estimation of 60% of the world's population to be living in an urban environment by that time period, Audi hopes to focus efforts on a practical and efficient urban future with their Audi Urban Future Initiative.

These renders provided by Audi and the architectural firms reveal a future with a focus on alternative energy, sustainability and as with all things Audi, style. Specific locations that were featured in Audi's project are Lower Manhattan, Hudson Bay, Central Park, Washington Heights, and Turtle Bay. If there's one thing we learned from Audi's initiative in envisioning the future of New York, its that there certainly isn't a shortage of great ideas and the future of New York and other urban areas are in the hands of some very talented architectural minds.