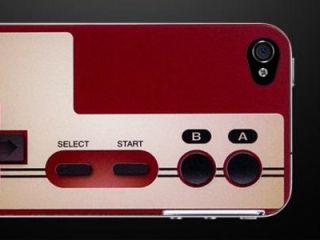 When the NES 8-bit console was released here, very few people knew that it was a drastic re-design meant to appeal to US customers. What the Japanese folks got instead was the Famicom, a sturdy little top-loader that looked just like every other console in the market. Still, it's as much of a classic as its American cousin.

Thanks to Tanomi, people can show their love for the Famicom. This custom polycarbonate case sports the iconic Famicom controller on its back. Now you can flip your phone over and pretend it's the 80's all over again. It won't work of course, it's just a decal. Still, a nice way to relive your 8-bit glory days in old Japan, and show how much of a gaming geek you are.

Now if only Ben Heck could somehow kitbash a real Famicom controller with an iPhone.