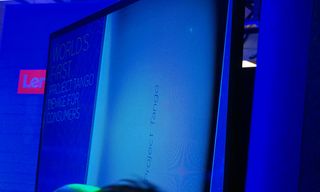 LAS VEGAS — Imagine using your phone to get turn-by-turn directions indoors or measure furniture just by snapping a photo of it? Google has been working on "Project Tango," an effort to build depth-sensing 3D devices and software for more than a year now, but so far the only hardware available has been a developer kit tablet distributed to a few thousand developers.

Today, Lenovo announced its plan to deliver the first Tango-enabled phone — likely the first mass market Tango device of any kind — in the summer of 2016.

In making the announcement, Lenovo Exec Jeff Meredith offered few tangible details about the upcoming product. It still has no name, no photos and no list of specs. What we do know is that the Tango handset will cost less than $500, be available in the U.S. and have a screen that is smaller than 6.5 inches. It will obviously run some version of Android and be powered by a Qualcomm Snapdragon processor.

Meredith showed slides with a few different designs that the company is considering and testing with consumers. However, these were very vague pictures of round and square handsets with gray or silver. He did say that the device would be thin enough to meet current consumer expectations for a phone.

Project Tango devices require several different cameras, including a depth sensor, a fish-eye lens for wide-angle viewing and a regular rear-facing camera. Meredith said that the company had done a lot of engineering work to fit all these sensors into a relatively-small vertical stack on the back of the phone. His also explained that his team had to develop new cooling methods to keep the cameras from getting too warm.

Before Meredith took the stage, Google Project Tango Lead Johnny Lee spent several minutes explaining the benefits of this technology. As we watched, he used a measurement app to get the precise height of the ceiling and the dimensions of a rug. He also showed photos of what turn-by-turn indoor directions would look like, with the phone imposing a set of direction dots on top of a real-world hotel floor. He launched an app that displays a virtual dog or cat on top of your real-world room. Finally, he played a game of augmented-reality Jenga by superimposing the virtual blocks onto his phone's live camera view.

While we haven't seen any official Tango devices, many of the capabilities Google and Lenovo touted have already been available in one form or another. Last year's Dell Venue 8 7000 tablet had an Intel RealSense 3D camera which gave it the ability to measure objects such as furniture by taking a photo. However, in our tests, the dimensions were often wildly inaccurate. Hopefully, Lenovo and Google get the measurement feature right, because there's no benefit in being within a few inches or a few feet of the correct dimensions.

Augmented reality games have been around for a very long time on phones with standard 2D cameras. Perhaps Tango will offer richer experiences, but there's nothing new at all about manipulating virtual objects on top of a real-world view.

Ultimately, both companies know that for this new platform to success, developers have to build killer applications. That's why Lee announced that Google is starting an App Incubator where it will offer both financial and logistical support to developers who want to build apps for the new phone. Meredith said that the best third-party apps would be pre-loaded onto the phone and used in marketing materials.