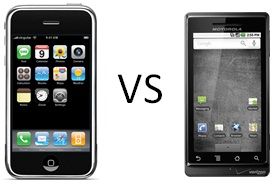 Google's Android mobile operating system has more than just caught up to the head starts that Apple and RIM had – it's taken the lead.

According to the latest statistics published by Nielsen, in November 2010 to January 2011, Android commanded 29 percent of the market, pulling ahead of RIM BlackBerry and Apple iOS, both of which were at 27 percent a piece.

Part of this could be attributed to the breadth of Android devices available. In sheer volume and selection, Android is more widespread over different handset designs and price points.

Nielsen's analyses by manufacturer find that Apple and RIM are still big winners as they make the hardware too, allowing them to both keep that 27 percent of the hardware pie too. In contrast, the largest maker of Android phones in the U.S. is HTC at 12 percent share, followed by Motorola at 10 percent.