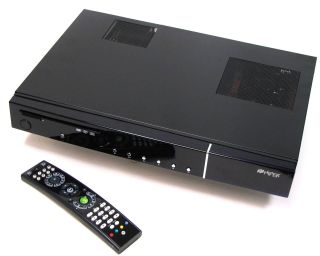 Slim, Quiet, and not exactly Cheap

The youngest member of Hiper’s slimline series of HTPCs now comes with a pre-installed micro-ATX motherboard. While buyers of previous models had to find their own motherboard and install it into the case, the HMC-2K53A-A3, as it is officially called, already ships with a Socket AM2 board made by MSI. What sets it apart from other offerings is that it sports an HDMI connector on the ATX shield. Hiper is also planning to create an Intel version.

The case itself is only 5 cm high, and from the outside, looks almost identical to its predecessor. The front has gained a display that shows information on a wide range of functions. The unit is controlled using an IR remote that ships with the case, as does a 200 watt power supply.

To turn the barebone into a fully functional HTPC, you’ll still need to buy and install a CPU with a cooler, some RAM, a hard drive, and an optical drive. The board’s graphics capabilities, which it owes to an ATI graphics chip integrated in the chipset, can not be upgraded. While there is an appropriate PCI Express slot, it is unusable due to the case’s form factor.

The PCI slots are a different story, though. Thanks to a so-called riser card, one of the PCI slots can be used for add-in cards such as a TV tuner. However, some limitations regarding the card’s size still apply, since the inside of the case is very cramped. Luckily, installing a TV tuner card is possible, even if it’s not exactly easy. We’ll talk more about this in the test setup section.

Next Page Technical Data
4 Comments Comment from the forums