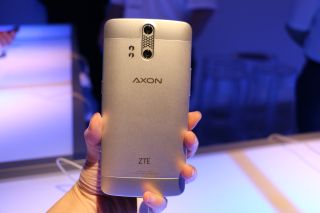 ZTE is growing its family of unlocked smartphones, with the new $330 Axon and $450 Axon Pro (64GB) joining the original 32GB Axon Pro ($400) in the series. The Axon line takes on the increasingly popular unlocked phone market by offering high-end specs at a relatively low price range of around $300 to $500, with dual-lens cameras and rich audio in a premium chassis.

The most interesting addition is the Axon, which borrows the Pro's 13-megapixel dual lens camera with 4K video recording, Android 5.1.1 OS and the Hi-Fi audio that ZTE claims as a first in the United States. The Axon also has the same 5.5-inch display as its higher-end brothers, albeit at a lower 1920 x 1080 resolution.

MORE: How to Buy An Unlocked Phone

At $330, the Axon's price tag comes close to the 16GB OnePlus 2's $320, and offers twice the storage. The lower-end Axon is equipped with a slower 2.0-GHz quad-core Snapdragon S800 CPU and just 2GB of RAM (as opposed to 4GB in the Pro), which could affect its performance.

I liked the Axon Pro's bright and sharp screen when I reviewed it, and its speakers delivered crisp, booming sound. Its dual-lens camera lets you adjust focus after shooting a picture, which is useful for finely customizing your shots. But the Axon Pro's biggest shortcoming was its dismal 6-hour battery life, despite its generous 3000-mAh battery.

HTC just took the wraps off of its One A9 midrange device, which gives you a 5-inch full HD display, fingerprint reader, octa-core processor and newer Android Marshmallow OS for $399. But it has a smaller 2150-mAh battery. Google's new Nexus 5X is in the same price range, starting at $379, and also offers a fingerprint reader, 5.2-inch 1080p display and Android Marshmallow. And despite packing a smaller 2700-mAh battery than the Axon Pro, the Nexus 5X clocked a whopping 11 hours and 30 minutes on our battery test.

We'll have to put the new Axons to the test to see if they'll stand up against the competition, but so far there are better choices available.