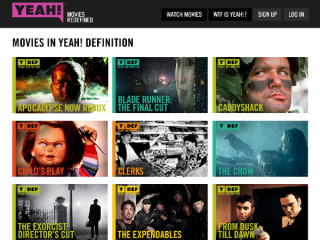 How many times have you Googled a fact about a movie while watching it?

YEAH!, an excitably named new Web-based movie-streaming service from AMC, promises that you might not ever have to look up those facts again.

YEAH! takes classic movies like "Blade Runner" and "Clerks" and adds new interviews, videos and other behind-the-scenes information. Some of this movie trivia has never even been revealed to audiences before, as YEAH! conducts its own original interviews with the cast and crew of the curated films.

"We don't use any materials from the DVD extras," said YEAH! General Manager Lisa Judson. "We only use things that we shoot and write."

MORE: Where to Watch Your Favorite TV Shows Online

The movies are available online at www.yeahtv.com and can be rented a la carte.

Currently, YEAH! has content to accompany 27 movies, which can be rented a la carte at $4.99 for 30 days. About 100 other, non-curated films, which include "Batman Begins" and "The Wedding Singer," cost $1.99 to rent but don't include the trivia, videos and other extra features.

There have been many so-called second-screen apps that compliment a TV show or movie with bonus information, such as "Grey's Anatomy Sync," which tied into the popular TV show. Most of these apps have had a mixed reception. YEAH! is trying to solve the problem by putting second-screen information on the first screen next to the film itself.

These tidbits of film lore are synced to the movie as it plays. Occasionally, video content relevant to the scene you're watching, such as an interview with a director or cast member, will become available as well. If you choose to watch the video, the movie will pause and a new window will appear, where the interview will play. When the interview is over, the movie will resume where you left off.

"We don't use any materials from the DVD extras," said Judson. "We only use things that we shoot and write."

The experience was designed to feel like watching a beloved movie with a film buff, Judson added.

Wes Craven, writer and director of "A Nightmare on Elm Street," told YEAH! that he learned new things about his own movie when watching the service's curated version.

YEAH! will soon allow users to purchase the movies outright, similar to what Amazon Instant Video, iTunes and Google Play do.

YEAH! is leaning on its curated content to set it apart from these other, more-established a la carte online movie distributors. However, YEAH! does have some unique offerings: Many of its movies aren't available on Netflix Instant, and some of them, like "Superman: The Movie," aren't on Amazon Instant Video either.

YEAH! is an offshoot of AMC Networks, and the annotation service is partially based on AMC's "story notes," which appear around movies aired on the TV channel.

Though AMC is obviously dependent on cable subscriptions, the network wanted to put a foot in the door of online video consumption, said Judson.

"Instead of trying to serve the biggest fan base possible, we looked to see if we could provide experiences for passionate film fans about specific films that they love," said Judson.

The website version of YEAH! was announced and went live at the South by Southwest media festival in March 2013, and an iPad version launches late October 2013.