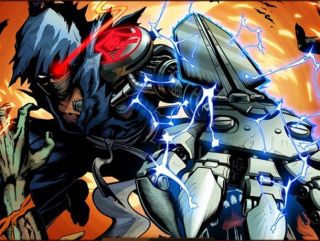 The "Ninja Gaiden" series has never been known for its subtlety, but "Yaiba: Ninja Gaiden Z" takes the absurd violence, gratuitous sexuality and absurd dialogue and ratchets them up to 11. This third-person action game pits new protagonist Yaiba Kamikaze against Ryu Hayabusa, the franchise's usual leading man.

Tom's Guide recently played through a hands-on demo of "Yaiba: Ninja Gaiden Z," and had a chance to experience the craziness firsthand. Despite being the protagonist, Yaiba is not exactly a heroic — or even nice — guy. In the opening cutscene, he stands up to Ryu, boasting of his skills, before getting promptly sliced to ribbons.

Yaiba returns as a cyborg ninja in a cel-shaded (which makes computer graphics appear to be hand-drawn) world full of zombies, urban hellscapes and profane exchanges with half-dressed support characters. Although the trailers for "Ninja Gaiden Z" have been rather subdued, make no mistake: The game is absolutely insane and quite funny — if over-the-top sex and violence are your scene, anyway.

The demo began with Yaiba fighting off a massive horde of zombies with a katana sword and a powerful robot arm. One button corresponds to the sword, one to the fist, and stringing them together creates stylish combos. The more efficiently you deal with foes, the faster your combo meter increases, although it wasn't exactly clear whether the meter conferred gameplay benefits or just bragging rights.

Yaiba traveled across the burnt-out shell of a city, stopping occasionally to do battle with more zombies or solve simple environmental puzzles. Action gamers will find the mechanics pretty familiar: Large zombies can dish out a lot of damage, and it's more efficient to block and counterattack than to button-mash. Tossing zombies into steamrollers or trucks could dislodge the vehicles and open up new paths.

There was also some simple platforming in between battles. Yaiba can jump over vast chasms, run across walls and smash through brick facades in mid-air. Tom's Guide had no problem navigating these sections, although we did notice that other players often had difficulty timing jumps correctly. How much players enjoy Yaiba's acrobatics will likely come down to individual skill.

The visuals in "Ninja Gaiden Z" are immediately arresting. Although the "Ninja Gaiden" series has had a stylized look tracing all the way back to its NES days, the cel-shaded graphics make it look like a particularly gory anime.

A neon color palette clashes agreeably with the buckets of bright-red blood that Yaiba spills with every stroke of his sword. Each one of the characters is distinctive and easy on the eyes, from the cybernetic Yaiba, to the heroic Ryu, to the buxom Miss Monday.

If ultraviolence doesn't make you laugh, rest assured that the game is just as ridiculous when it comes to sex.

At one point, Yaiba needs to move an inconveniently placed truck. He does so by tossing a zombie into the driver's seat, launching the vehicle into the air and jamming it in-between a giant set of stocking-clad legs protruding from the roof of a nearby lingerie store. Yaiba throws his head back and laughs as a veritable monsoon of panties rains down around him.

Yaiba can also use enemies against each other. In addition to grabbing a zombie and using it to bludgeon other zombies to death (in a move the game dubs "The Meatslap"), defeating a giant fire-breathing zombie left Yaiba with the creature's head. The grisly trophy could fire smaller zombie heads as grenades, or just breathe fire like a flamethrower.

The demo ended as an enormous, slavering two-headed zombie emerged from an alley and chucked a car at Yaiba. Presumably, in the full title, a ridiculous boss fight will ensue.

"Yaiba: Ninja Gaiden Z" is a video game that embraces the bizarre logic and outrageous spectacle that games thrived on back in the '80s and '90s. It's fun, it's excessive and it's completely immature. If that sounds like a perfect remedy to some of the grim, serious trends in the mainstream game market, check it out when it debuts on PlayStation 3, Xbox 360 and PC sometime in the second quarter of 2014.