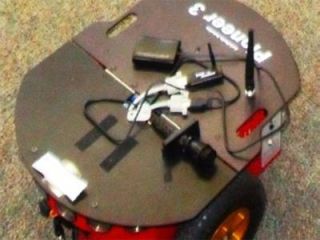 A baby-controlled robot?! It sounds like the kind of hell that only parents and robot doomsayers can imagine. Why after all, would you hook up such a temperamental creature to a cold, unfeeling machine that may very well revolt against its human oppressors? According one Cornell grad student, it'll help with the baby's emotional development.

Ok, so she's not exactly strapping toddlers to giant death robots. Madeline Smith wanted to prove that "independent mobility is crucial in  the development of typical infants." To test out her theory, she built a Wii-controlled robot for babies. An infant seat was mounted atop a Wii Fit balance board, and the whole contraption was then strapped on top of a Pioneer 3 robot.

According to Smith's research, her Wii'bot chair worked well for children in the age of 7 to 9 months. They would zip about the room unaided, and without any encouragement necessary. A wireless remote control override was thankfully added to reign in the little speed demons, much to the relief of parents worldwide.

Smith believes that the success of her study will help youngsters suffering from physically debilitating diseases like cerebral palsy to achieve normal mental and psychological development. Hopefully, these children won't grow too attached to their little robo-chariots, silently plotting to one day rule the world astride a fifty-foot death machine.